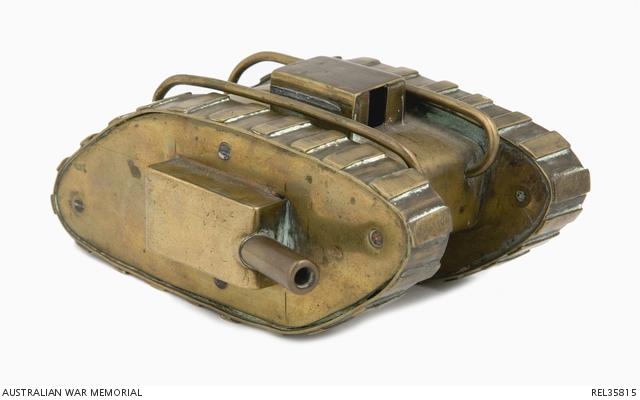 Metal trench art in the shape of a British Mark IV Male tank. The tank has been soldered and screwed together. There is evidence of polish in the joins of the body, tracks and guns on the tank, and silver coloured markings where the item has been soldered.

Associated with the service of 2557 Private Claude Harris Adams. Adams enlisted in the AIF on 13 July 1915 and was assigned to 22 Battalion. An 18 year old labourer he enlisted with the permission of his parents, George and Mary Adams. He embarked from Melbourne with the 6th reinforcements on board HMAT Ulysses on 27 October 1915. In January 1916, while in Egypt Adams transferred to 16 Company, Australian Army Service Corps for two months before transferring again to the newly established 58 Battalion.

The Battalion was raised in Egypt on 17 February 1916 as part of the expansion of the AIF. Roughly half of its recruits were Gallipoli veterans from 6 Battalion and the other half fresh reinforcements from Australia. The battalion became part of the 15 Brigade, 5 Australian Division. Arriving in France on 23 June, the 58th took part in its first major battle on the Western Front at Fromelles, on 19 July, where almost a third of its men became casualties. Despite the heavy losses in its battalions 5 Division continued to man the front in the Fromelles sector for a further two months. Early in 1917, 58 Battalion participated in the advance that followed the German retreat to the Hindenburg Line, but it was spared from the assault. It did, however, defend gains made during the second battle of Bullecourt, between 9 and 12 May. Later in the year, the AIF's focus of operations moved to the Ypres sector in Belgium. The 58th's major battle here was at Polygon Wood on 26 September. In late March 1918, 5 Division moved to defend the sector around Corbie in France; 58 Battalion was the 15th Brigade's reserve during the counter-attack at Villers-Bretonneux on 25 April.

When the Allies launched their own offensive around Amiens on 8 August, the battalion was among the units in action, although its role in the subsequent advance was limited. The battalion was involved in the fighting to secure Peronne at the beginning of September and entered its last major battle of the war on 29 September 1918. This operation was mounted by 5 and 3 Australian Divisions, in co-operation with American forces, to break through the formidable German defences along the St Quentin Canal. The battalion withdrew to rest on 2 October 1918 and saw no further fighting before the war ended.

On 17 January 1919 while on leave in England Adams married Grace Elizabeth Train, a 23 year old from Ealing. He was to embark from England with his wife on HMAT Zealandic in July 1919, but he did not do so, and returned to Australia at a later date.