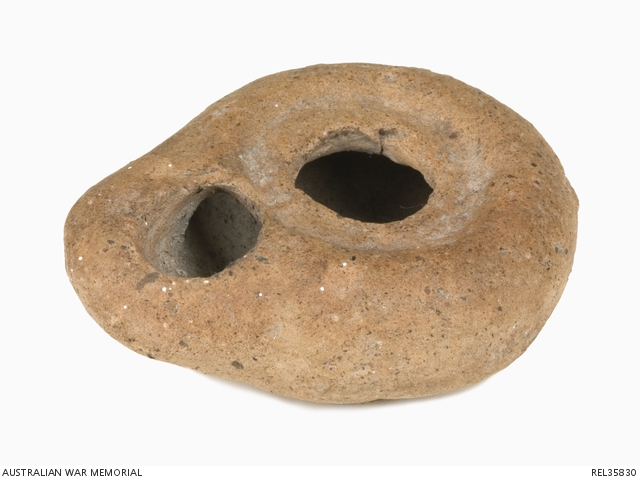 Small unglazed pottery oil lamp, dating from the Roman occupation of the Middle East and Egypt.

This lamp was found by 180 2nd Corporal Carlyle Keritz during his service with 1 Squadron, Australian Flying Corps. Keritz was working in Richmond, Victoria, as a telephone mechanic, when he enlisted in the AIF on 14 January 1916, at the age of 23. He had been attached to the AIF Signal School and the Aviation School in the month before his enlistment. Keritz sailed for Egypt aboard A67 HMAT Orsova on 16 March 1916 and was assigned to A Flight 67 Squadron, Royal Flying Corps (later renamed 1 Squadron Australian Flying Corps). He remustered as a fitter and turner with the squadron in October 1916, and by the end of the First World War was an Air Mechanic 1st Class (2nd Corporal). Keritz served in Palestine and at Kantara and Abassia in Egypt. He was injured in a flying accident in November 1917. Keritz returned to Australia on 4 February 1920. He served again in the Second World War, as a private in 4 Battalion, Volunteer Defence Corps, between March 1942 and October 1945.