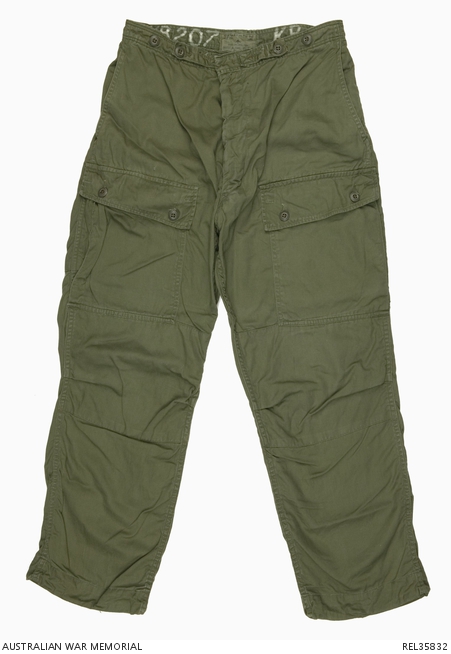 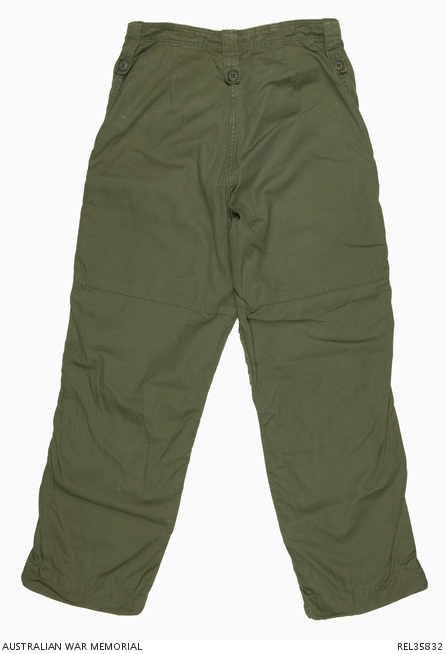 Jungle green trousers with concealed zipper fly closure. The trousers have slash pockets at the hips. Two patch pockets are sewn on the front above the knee with flaps and button closure. The trousers have a waist band with three belt loops attached with buttons. There are another two buttons along the waistband on each side of the fly with attached fabric tabs as a means of tightening the trousers. The trousers have elastic drawstrings around the ankles. A tag sewn on the inside waistband reads 'CONWAY Bros Pty Ltd. S. AUST 1970. 8405-66-034-7000 WAIST & SIZE 31-35R'. The tag also has space for name and service number. On each side of the tag is written 'KB207' in white. Another tag sewn near the fly gives ironing instructions.

Trousers associated with the service of Private Donald John Hannaford. 2795142 Private Hannaford was born on 15 July 1949 at Windsor NSW. He enlisted on 22 April 1970 at Sydney NSW as part of National Service call up. Hannaford had previously worked for 3 years as a bank clerk. He embarked from Adelaide on 15 February 1971, arriving at Vung Tau on 25 February on board HMAS Sydney. He served for several months in Vietnam before returning to Australia, embarked in Vietnam on 16 October 1971. Hannaford was discharged on 9 December 1971 after completing his period of service.