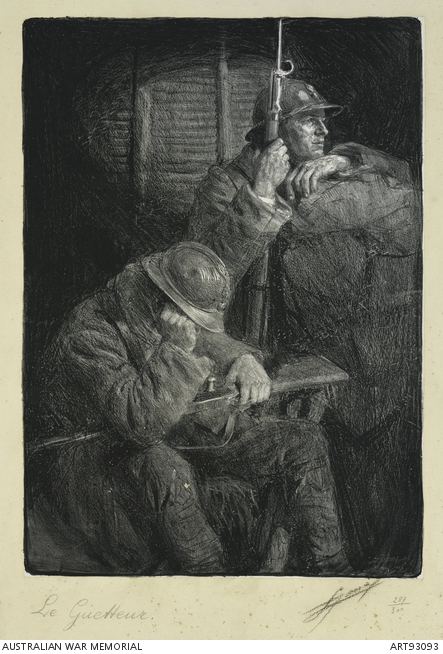 Two French soldiers on lookout duty in a trench on the Western Front. While one rests, the other keeps watch across the "no man's land" between the German and French trenches.

Lucien-Hector Jonas was a well known artist working in Paris in the late-nineteenth to early twentieth centuries, and exhibited regularly at the Paris salons. Jonas was born at Anzin in France on 8 April 1880. He studied first at Valenciennes with Layraud then went to Paris to study with A Maignan and Bonnat. He joined the Societaire des Artistes Francais in 1904 and was awarded third class medal in 1905, second class medal and a scholarship to travel in 1907, the Prix du Salon in 1911, and the second Prix de Rome and the chevalier de la Legion d'Honneur. During the First World War he produced several posters for the French government. The war also inspired him to produce large commemorative paintings which decorate various public buildings in Paris. In his works Jonas frequently decried the life of the miners and the ugliness of 'le pays noir' (the name given to mining and industrial areas in France and Britain during the late nineteenth and early twentieth centuries). Jonas's works are represented in art museums in Calais, Cambrai, the Metropolitan Museum of Art in New York, Perigueux and Valenciennes. He died in Paris in 1947. (biog. translation from Benezit, vol. 6, p. 93).