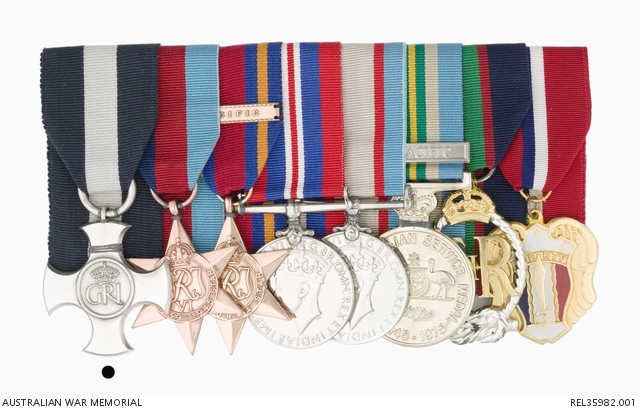 Cyril Holt McGee was born at Glenelg, South Australia, in 1920. During the Second World War he joined the Royal Australian Naval Volunteer Reserve (RANR) as an able seaman, with the service number PA1504, on 18 September 1939. At the beginning of 1941 he was commissioned as a sub-lieutenant and posted to HMAS Manoora. By June 1942 he had undertaken further specialist training and qualified in hydrography, as an Assistant Surveyor 4th Class. The RAN hydrographic survey ships were generally small ships that carried out work in dangerously shallow coastal waters. They entered uncharted waters, often behind enemy lines, to prepare accurate charts for heavy ships in the bombardment groups that supported allied landing craft. In October 1942 McGee was posted to the survey ship HMAS Stella, before transferring to HMAS Polaris, as commanding officer and hydrographer, in January 1943. McGee was promoted to lieutenant in July 1943. Between July and September Polaris, together with HMA ships Stella, Benalla and Shepparton, carried out dangerous and important survey work for the Australian landings at Lae, Salamaua and Finschhafen. Lieutenant McGee was awarded the Distinguished Service Cross for 'distinguished service in survey work under dangerous conditions' while serving in HMAS Polaris. In July 1944 McGee was posted to the sloop HMAS Warrego, which was attached to the US Seventh Fleet Survey Group (TG 70.5) in New Guinea waters. Promoted to Assistant Surveyor 3rd Class, he transferred to the River Class frigate HMAS Gascoyne at the beginning of October 1944, again attached to TG 70.5, this time undertaking survey work in advance of the Philippines landings at Leyte and Lingayen. Between 18 October and 17 November Gascoyne experienced 39 Japanese air attacks, but was undamaged. McGee returned to Sydney in February 1945 and was subsequently posted to HMAS Lachlan before returning to the shore establishment HMAS Torrens in Adelaide, where his appointment in the RANR was terminated in February 1946. He immediately transferred to the Royal Australian Naval Volunteer Reserve, from which he retired in 1958.