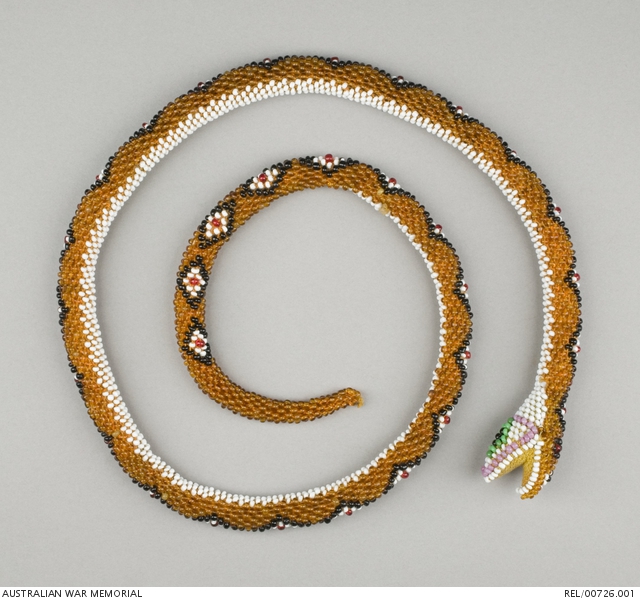 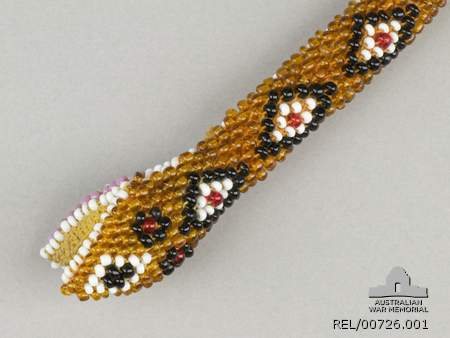 Associated with the service of 965 Lance Corporal Edward Harris. Harris enlisted on 11 February 1915. He embarked from Melbourne on board HMAT Uganda on 21 June 1915 with 8 Light Horse Regiment and served on Gallipoli from September to early December 1915, before being admitted to 1 Australian Light Horse Field Ambulance with trench feet. Ten days later he was transferred to the Hospital Ship Oxfordshire with frost bite. He served with Depot stores in Cairo and Ghezireh in 1916 and 1917. Harris returned to 8 Light Horse in August 1917, serving in Palestine until the end of the war apart from two periods in hospital in Egypt and Gaza, the latter for malaria contracted in the summer of 1918. He was appointed lance corporal on 9 May 1919. On 3 July he left for Australia on board HT Malta. This beadwork snake was made by an Ottoman prisoner of war (POW) in a British POW camp, probably in Egypt. Except for fatigue duties, prisoners were generally not required to work. Making craft items, along with playing sport, games or music helped them pass the time. The prisoners also made these items as a way of making some money to buy extra rations and supplies, such as coffee or tobacco; to barter with other prisoners; or as gifts for friends or family. Although many of the snakes produced in the camps have ‘TURKISH PRISONER’ beaded into their bellies the maker may not have been ethnically Turkish as the Ottoman Empire stretched from the Balkans to the Sinai, and the soldiers in its armies came from throughout the empire. The bulk of the Memorial’s beadwork collection comes from Egypt but there were also prison camps in England, Salonika, Cyprus, Mesopotamia, India and France where prisoners made similar souvenirs. The snakes usually have a variation of a zig zag design or a diamond design on their backs. The bellies are generally white, often with text beaded in black or dark blue. Occasionally other colours are used. Some have decorative patterns, such as diamonds or triangles between the words on their bellies. The snakes were made using single stitch beaded crochet. To make them beads had to be strung in order of the design before crocheting commenced. Some of the smaller beaded crochet items could be made with all the beads strung at once. The larger snakes had to be strung and made in sections, fastening the new thread to the worked one as the work progressed. The snakes were stuffed with whatever materials were available, such as cotton thread, rags, or horsehair to keep their shape. The mouths are plain thread crocheted into two triangles that are attached to the snake. Snakes were amongst the most popular souvenirs made and sold. They were considered to bring good luck in parts of Southeast Europe, and there were many rituals and superstitions surrounding them, which could be why they were a popular subject. Their shape may have been another reason they were popular with POWs as they are essentially a long tube, which is relatively easy to make in crochet beadwork.