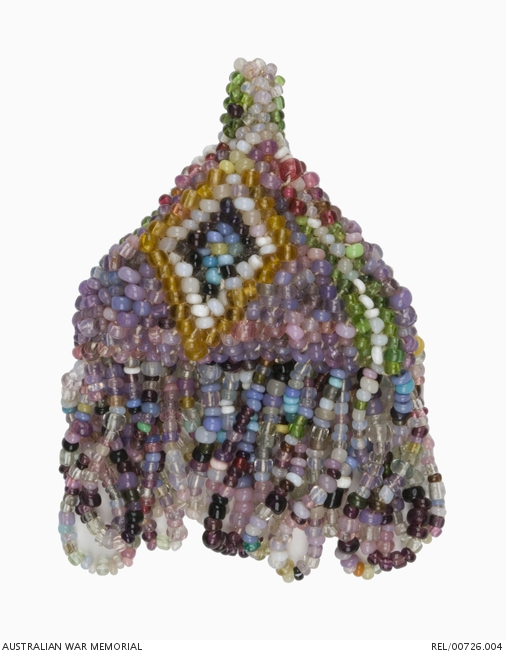 A multicoloured triangular crochet beadwork pendant. The pendant has been broken off a larger item - possibly a necklace - and has a loose thread at the top. The pendant has a multi coloured beaded fringe on the lower edge.

Associated with the service of 965 Lance Corporal Edward Harris. Harris enlisted on 11 February 1915. He embarked from Melbourne on board HMAT Uganda on 21 June 1915 with 8 Light Horse Regiment and served on Gallipoli from September to early December 1915, before being admitted to 1 Australian Light Horse Field Ambulance with trench feet. Ten days later he was transferred to the Hospital Ship Oxfordshire with frost bite. He served with Depot stores in Cairo and Ghezireh in 1916 and 1917. Harris returned to 8 Light Horse in August 1917, serving in Palestine until the end of the war apart from two periods in hospital in Egypt and Gaza, the latter for malaria contracted in the summer of 1918. He was appointed lance corporal on 9 May 1919. On 3 July he left for Australia on board HT Malta.

This pendant is similar to those made by Ottoman prisoners of war (POW) and probably broke off from a crochet beadwork necklace. The pendant is possibly civilian made, rather than made by a POW. The POW beadwork tends to be of a higher quality than this item and is more standardised in the number and type of beads used - this pendant is made using a great mix of beads. It was made in Egypt or Palestine.