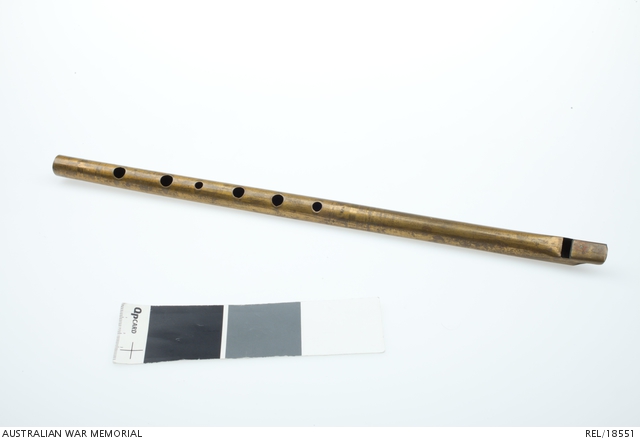 Flageolet, penny whistle or tin tube whistle in the key of D with six finger holes, supplied with a lead fipple plug and a gilt wash finish. The key (D) is impressed into the tin just above the highest finger-hole.

Tin whistle, also known as a flageolet or penny whistle, used by Lieutenant Frederick John "Dad" Jarvis, 3 Battalion, AIF during the defence of Strazeele in April 1918. Jarvis, born in England, studied at Cambridge University and worked as a school teacher. He was travelling through Canada and Australia to improve his health when war was declared. Being in Australia, he enlisted at Randwick, Sydney with 3 Battalion on 19 August 1914, at the age of 30. He served with them at Gallipoli, where he kept a photographic record of the battalion's activities - many of the memorial's images of 3 Battalion from this period bear the line "Lent by Lieutenant Jarvis". In late July he was evacuated with dysentery and wasn't discharged until December. He was obliged to undergo a long convalesence and was temporarily transferred to the Australian Army Pay Corps in mid 1916, and later, on 17 November, to Headquarters, AIF Depots at Perham Downs, England. In April 1917 he reported to Officers Cadet Battalion, Oxford and qualified as an officer in late August, being appointed a second lieutenant. He joined 3 Battalion on 6 October and was promoted to lieutenant on 1 April 1918 when his unit was stationed in Belgium.

Strazeele was one of the towns targetted by German forces during Operation Michael in April 1918 and came under attack on 14 April as the Germans attempted to break through to Hazebrouck. British forces had been overwhelmed by the huge rolling assault and 1 Australian Division (1 to 4 Battalions), then stationed near Ypres in Belgium, were rushed south to defend the towns of Mereten and Strazeele. German forces approached Strazeele on the morning of 14 April; 4 Battalion were stationed forward and to the north of Strazeele, while 3 Battalion held outposts to the south. Lieutenant Jarvis' platoon were located near Gutzer Farm as the Germans emerged in waves from the woods to the east; the Australians poured rifle and machine gun fire into them. Corporal Turvey, reported Charles Bean, stated that "shooting at the advancing enemy was 'like firing into a haystack - one could not miss'." By 3 o'clock the attack, suffering large casualties, had lulled.

At this point, Lieutenant Jervis, described by Bean as a "lighthearted young Englishman", stood up, pulled out his tin whistle and played 'Australia Will Be There' to the laughing cheers of his fellow Australians. Once finished, he declared that the next tune would bring the Germans rushing to him, and proceeded to play "Die Wacht am Rhein" ("The Watch on the Rhine"). He quickly became the target of German machine guns, and was obliged to desist. His action was widely reported in the Australian press in late April, accompanying reports of what became known as the Battle of the Lys.

On 23 August, Jarvis was reported as wounded in action but remaining on duty. He returned to Australia aboard the transport 'Aeneas' which departed England on 22 November 1919 and was discharged on 12 March 1920. His health, always of a fragile nature and exacerbated by his service, declined and he died on 14 July 1925. His obituary, written by 'a cobber', notes that "as a racontour and musician he was without equal, and his tin whistle was famous in his battalion and in the 1st Brigade. When things were going worse, Dad's whimsical humour never failed to rise to the occasion, and many a time, too, overstretched nerves were soothed and eased by a well-told joke or a humouous experience or a musical monologue on the 'okarina'. "

This flageolet is typical of the style developed from the sixteenth century onwards, employing six finger holes and capable of a range of two octaves. Several keys can be encountered, ranging from Bb - with a length of 35.5 cm - to the smallest in the key of G. Jarvis's example in D is popular with folk musicians and is ideal for accompanying the violin.