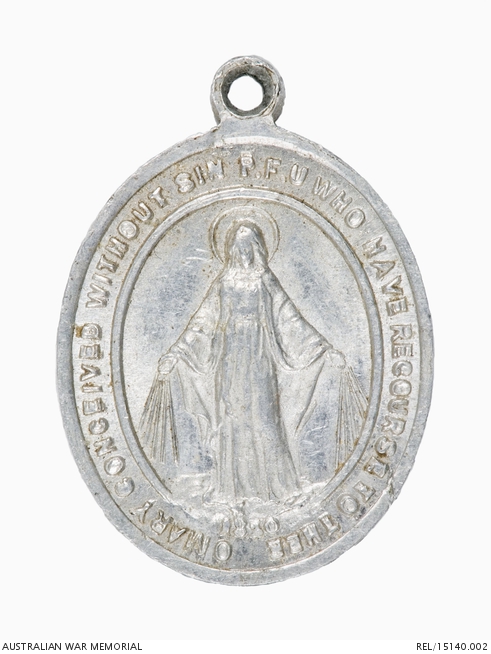 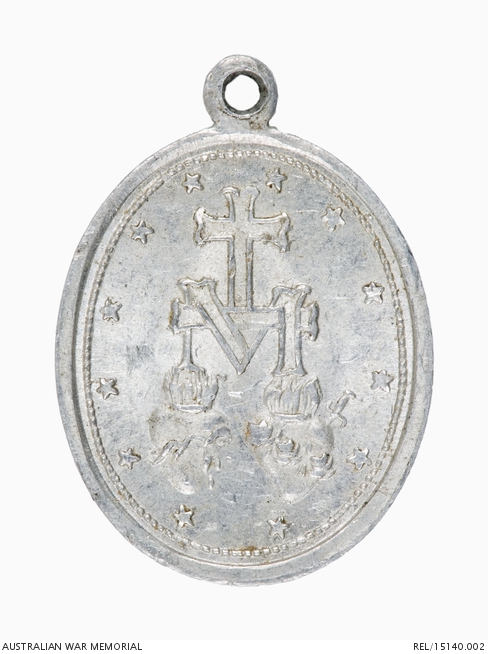 White metal religious medal with an image of the Virgin Mary on the obverse, standing on a globe and crushing the head of a serpent beneath her foot. Beneath her is the date 1830. Rays shine from her hands. Around her is written 'O MARY CONCEIVED WITHOUT SIN P.F.U. WHO HAVE RECOURSE TO THEE'. On the reverse is a cross interwoven with an 'M'. Beneath this are two hearts, the first with a crown on top and a ring of thorns around it, the second, also with a crown on top, is pierced by a sword. Around the edge are 12 stars.

Associated with the service of NX45126 Private Kenneth Russell Rose. Rose was born in September 1922 and enlisted on 19 September 1941. He served briefly in Malaya as a general reinforcement from 10 January 1942 and appears to have escaped from Singapore to Java when the city fell to the Japanese on 15 February. He was evacuated from Batavia on 23 February, aboard SS Edendale, arriving in Fremantle, WA on 5 March. In August 1942 he was posted to the Middle East where he was assigned to 2/13 battalion, returning to Australia on 26 January 1943. After training in Queensland the battalion arrived in New Guinea, at Milne Bay, in July 1943. Rose received a bullet wound to the right shoulder, eyelid and brow on 22 September 1943 during the Scarlet Beach landings to take Finschhafen. He was evacuated to Australia, where he also developed malaria. Rose saw no further service outside Australia, and was discharged medically unfit on 31 May 1945. He had married Susan May Frances MacKay on 4 November 1944. The medal of the Immaculate Conception, commonly called the Miraculous Medal, was made known to Saint Catherine Laboure in a vision at the chapel of the Motherhouse of the Sisters of Charity, Paris, France. On 27 November 1830 Sister Catherine was visited by an apparition of the Virgin Mary. Her feet rested on a white globe. She wore rings on her fingers, and each ring set with gems. The larger gems emitted great rays and the smaller gems, small rays. They were symbols of the graces Mary would shed upon those who ask for them. A frame formed around the Mary. Within it was written in letters of gold: ‘0 Mary, conceived without sin, pray for us who have recourse to thee.’ The vision turned and Catherine saw a large ‘M’ surmounted by a bar and a cross; beneath the ‘M’ were the hearts of Jesus and Mary, one crowned with thorns, the other pierced with a sword. She was told by a voice to have a medal struck with the images and words.