Valley of the Somme 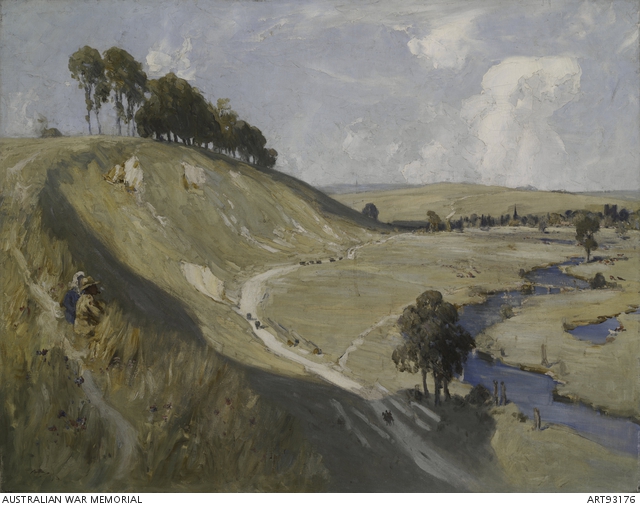 This work was painted on the first of Fullwood's tours of duty in France, in the summer of 1918. It shows a high, grassy escarpment sweeping into the middle distance, topped by a dark olive silhouetted ridge of trees and with chalky outcrops and roads in the river valley below. The manner in which Fullwood has painted the grass, the stream and the cloud shadow make the work curiously reminiscent of his Australian landscapes, showing how Australian artists brought Australia into their European landscapes. Indeed, the artist himself was later to write: 'It is a strange thing, but all that country along the Somme reminded me very much of Australia in its colo[u]ring and often when I have been looking down upon some sunny valley I have been struck by the resemblance to the scenes I had painted near Heidelberg in the old days.' [ A. H. Fullwood, 'The Gazelle Girl. Artist Discovers Type. 'New Art' Attacked', The Herald, Melbourne, 18 September 1920]. This particular sunny valley is just outside the village of Daours, near Amiens, looking eastward towards Corbie - identifiable by the twin towers of its abbey church. The mood of the picture is predominantly one of calm and clarity, but there are hints of darkness. On the road below are two soldiers on horseback and a row of military vehicles, the seated Australian soldier (smoking a cigarette) is accompanied by an army nurse in uniform, while blood-red poppies dot the foreground grasses. Just over the horizon to the south are the frontline trenches where the Australian Corps had halted the German army's final 'Michael' offensive at Villers-Bretonneux just a few months previously. This broad, bright landscape is one of the artist's most impressive First World War paintings, and is reminiscent of his Australian landscapes produced around Sydney in the 1890s. The watercolour 'Somme Valley near Daours' (ART02488) in the Memorial's collection is likely to have been taken from the same vantage point yet looking behind.