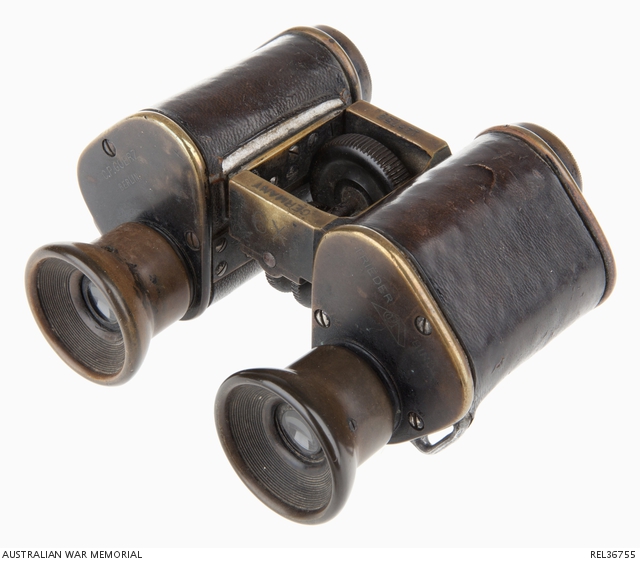 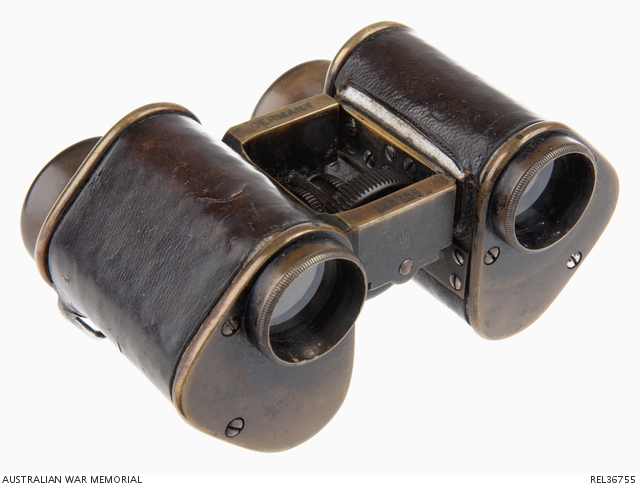 A pair of privately purchase Goerz Trieder 6x15 German officer's field glasses. The curve-edged triangular aluminium barrels are covered with brown leather. Aluminium strap brackets extrude through the leather covering at the eyepiece end of each barrel. There is a central metal dual thumbwheel facing lengthwise for adjusting distance focus. Another single thumbwheel connects to a rack & pinion adjuster for interpupillary distance. The right eyepiece lens can be individually adjusted. Stamped on the brass rear face of the left barrel is 'C. P. GOEZ BERLIN'. 'TRIEDER' and 'BINOCLE is stamped on the corresponding end of the right barrel separated by a stamped triangular prism figure enclosing the three stylised letters of the maker C. P. G. On the rear of the adjustable bridge bar is stamped '6X'. Along the top edge of the same bar 'GERMANY'. On the top edge of the front bridge bar is the serial number '126756'.

These field glasses were taken from a captured German officer and are related to the service of Private Harold Reece, though where and when they were taken is not known. 18 year old Reece enlisted in early 1916 and was posted as reinforcement to 17 Battalion, private number 5625. He embarked on HMAT 'Euripides' on 9 September bound for training in England before joining his battalion in France on 23 January 1917.

Though illness and kidney problems kept him off the line for much of 1917 he did see action when 17 Battalion, along with three other battalions, attacked Lagnicourt in April, defeating a German counterattack force almost five times stronger. In May he took part in the Second Battle of Bullecourt, a successful but ferocious battle that cost three Australian Divisions almost 7,500 casualties.

Following an extended period of further illness, Reece returned to his unit in May 1918. On 8 August, the day that German General Erich Ludendorff later called the 'black day of the German Army', the battalion took part in the successful assault on Amiens. Later that same month the battalion was involved in the attack on Mont St Quentin.

In the battalion's final battle near Montbrehain on 3 October, Reece was gassed and taken off the line for the last time. Convalescing in England, he was detailed to the Australian Military Transport Service, remaining with the unit until his return home. Reece returned to Australia on 22 February 1920 and was discharged two months later.