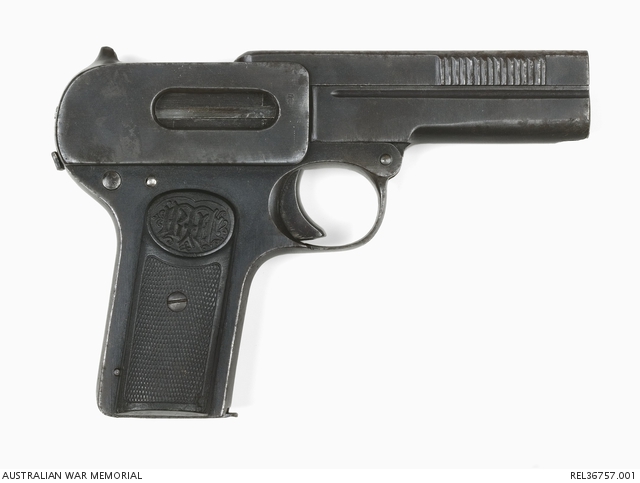 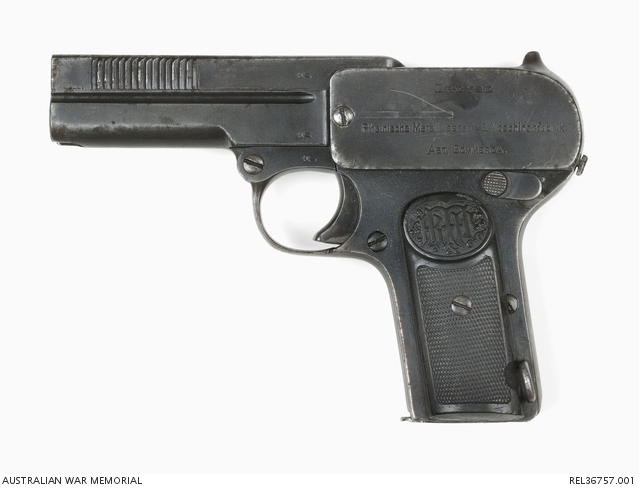 Dreyse Model 1907 semi-automatic pistol. Slab sided action with serrated sides to the forward section of the barrel cover and a large central top groove for the sights. Marked on the left side of the action 'DREYSE' over 'Rheinische Metallwaaren & Maschinenfabrik' over 'ABT. SOMMERDA.'. Black ebonite checkered grips with the monogram 'RMM' in the top quarter held to the frame by a single central screw bolt. Fixed lanyard loop to the left side of the grip. Complete with an eight round magazine. Serial number is 196832. Calibre is 7.65 mm (0.32" Colt Automatic Pistol).

Ernest Ellerman Paterson was born in Melbourne in 1881. He served in South Africa in the Boer War as a private in the 5th Victorian Mounted Rifles Contingent, with the service number 751, between January 1900 and April 1901. Following the war Paterson maintained a keen interest in the military and served with a number of militia units: the Victorian Scottish Regiment, the Melbourne Cavalry and the 52nd (Hobson’s Bay) Infantry Regiment. He had been recently commissioned in the latter regiment when he enlisted for service in the First World War, on 25 September 1916. Paterson was assigned to the 18th reinforcements of 22 Battalion, AIF, as a 2nd Lieutenant. He sailed from Melbourne for overseas service on 23 November 1916, aboard HMAT Hororata, arriving in Britain at the end of January 1917. In May 1917 Paterson joined his battalion in France. He was promoted to lieutenant in September 1917. Paterson was awarded the Military Cross for an action which took place at Ville-sur-Ancre on 19 May 1918 ‘For conspicuous gallantry and devotion to duty’. Ernest Paterson was killed in action on 3 October 1918, near Estrées, during the Battle for the Hindenburg Line. He is buried at the Prospect Hill Cemetery at Gouy, France. After his death his personal effects were returned to his widow, Charlotte. They included a number of German firearms that Paterson had captured and retained as souvenirs. The serial number on this pistol corresponds to the number on one of firearms sent to Mrs Paterson in 1919.