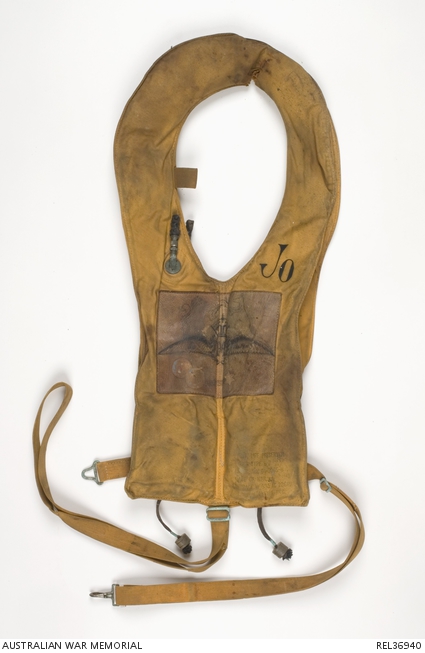 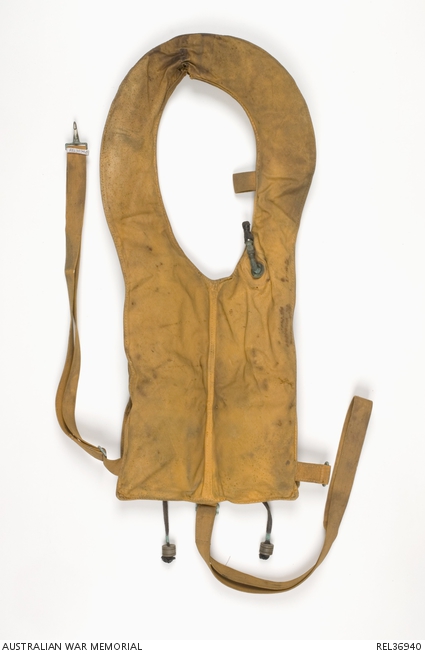 Yellow B3 model life preserver vest made from yellow cotton enclosing two latex rubber bladders (front and rear), now perished. A small toggle-activated CO2 cylinder is mounted behind each lower front panel for inflating the vest, and a pair of rubber tipped aluminium inflation tubes are fitted to the upper right section, allowing the wearer to inflate the bladders if the cylinders fail. A cotton webbing loop is attached close to these and is designed to locate the tubes close to the wearer's mouth - the perished tubes no longer pass through this. A pair of yellow cotton webbing straps with adjusting buckles are located at the base of the vest for securing around the wearer's waist and under the crutch. A leather panel, designed to stop wearing and rubbing of the vest by the parachute straps, is sewn to the front of the vest. It has been decorated in black ink with a pair of RAAF wings surmounted by a kangaroo and a lion holding a boomerang. An inked and painted design below this now only features a pair of circles and a star with all the painted elements almost effaced, although enough paint exists to presume one was a British RAF roundel. The name 'Jo' has been inked onto the proper upper left panel; the lower left panel is printed with the maker's and model details and states: 'Vest, Life Preserver / Type B-3 / Spec No 84-3065-B / Date of Mfr: July 1942 / Contract W 535 AC 23619 / Air Cruisers Inc'.

Life preserver associated with the service of 407014 Flight Lieutenant Wynton Powell Thorpe of Adelaide, SA, born 17 July 1920, who enlisted on 29 April 1940. Thorpe trained in Australia, including with the Seaplane Training Flight at Rathmines, through 1940 and early 1941 before embarking for the UK, where he commenced operations with 10 Squadron RAAF at Mount Batten and later Pembroke Dock. He flew his first operational flight (an anti-submarine patrol) on 17 May 1941. Thorpe served with 10 Squadron until March 1943, mainly flying (as either pilot or co-pilot) convoy escorts, anti-submarine or anti-shipping patrols. Notable operations include supporting a Commando raid in April 1942; surviving a JU88 attack and attacking U boats. On 27 July 1942, in the Bay of Biscay, Thorpe's Sunderland was making a bombing approach on shipping when they encountered a Messerschmitt 109 fighter. In his debriefing, Thorpe stated 'The ME came up on the starboard quarter and rapidly moved on to the beam. I told Jack to have a crack at him as he went around on the starboard quarter. Then I saw he was trying to do a side-slipping turn to get a shot at our nose, and I told nose to give him a nudge as he went past. The last I saw of the Jerry was when he came out under the port wing in a vertical dive for the drink.' Almost immediately after downing the ME 109, they started their bombing run on the shipping and were hit by flak, igniting a flare and narrowing missing both pilots. Despite this, they were able to return to base.

On 13 November 1942, Thorpe was captaining Sunderland W6054/D which picked up five passengers in Gibraltar for a return flight to Plymouth. Among these five was Captain Frederic Thornton `Fritz` Peters, DSO, DSC and bar, DSC (U.S.) of the Royal Navy. Peters had just been released from a Vichy French jail at Oran Harbour by US Forces on 10 November after leading Operation Reservist, a raiding party of two cutters and two motor launches which attempted to capture the Algerian harbour two nights previously, where he was injured and captured. After the Allied landings at Oran he was released and was in Gibraltar to fly directly to a briefing on the attack with Winston Churchill. He was later recommended for a Victoria Cross for his actions at Oran.

The Sunderland ran into increasingly violent weather which changed to thick fog as they approached England; Thorpe recalled that 'the night was as black as the inside of a cat' and, with 15 minutes of fuel left, he chanced a landing, relying solely on his altimeter to gauge his landing height. 'The altimeter was reading 600 feet when we slammed into the sea.' Crashing at full power, the Sunderland split in half and spilled its passengers and crew into the icy cold sea. Despite all the 11 crew surviving, all the passengers either died on impact or succumbed to the cold. Thorpe tried to save the injured Captain Peters, but he died in the 90 minutes it took to rescue the downed crew; Thorpe later discovered Peters was recommended for a VC. Flight Lieutenant Thorpe was wearing this Mae West inflatable vest when the accident occurred and credits it with saving his life. Thorpe embarked from England on 8 April 1943, and returned to Australia via the United States of America, disembarking at Brisbane, Queensland on 24 July 1943. In Australia Thorpe served in the Operations Room, Townsville; 3 Air Observers' School, Port Pirie, South Australia and 1 Operational Training Unit (OTU) at Sale. He converted to Catalinas and, in 1945, flew with 11 and 20 Squadrons. He was discharged on 28 March 1946. Wynton Powell Thorpe passed away on 12 July 2008. One of the propellers from his crashed Sunderland was recovered from outside the breakwater at Mount Batten in the 1980s by Neil Griffin and was donated to the Bull Creek Museum in Western Australia. A portrait of Thorpe was undertaken by Colin Colahan in England in 1942 and is held in the Memorial's collection under reference ART23535.