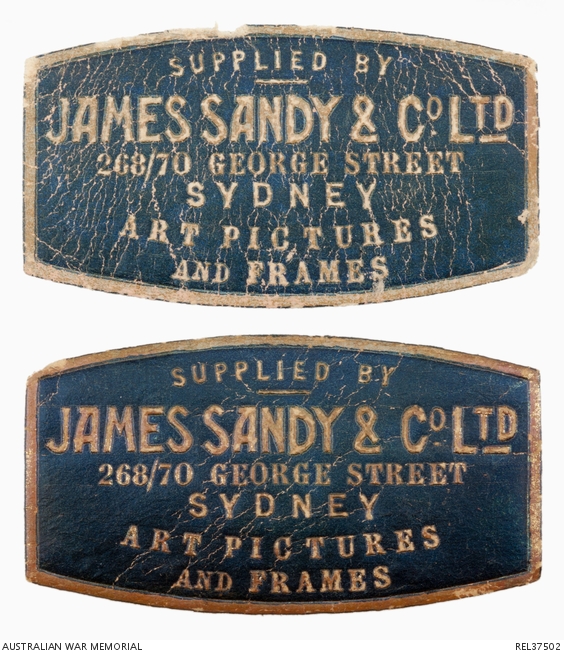 Pair of identical business stickers for 'James Sandy & Co. Ltd, 268-270 George St, Sydney - Art Pictures and Frames'. The stickers are printed in gold on a blue background, with all text embossed.

Pair of stickers advertising the family business of James Sandy (Snr), father of Lieutenant (Lt) James Lionel Montague Sandy, Australian Flying Corps (AFC). Lt Sandy was originally appointed to the AIF in 1914 as a Second Lieutenant in the Australian Field Artillery and was an original member of the 1st Field Artillery Brigade. He sailed in the first convoy to Egypt on board HMT Argyllshire (A8) and served in the 3rd Battery at Cape Helles on the Gallipoli Peninsula, until he was wounded in July 1915 and sent for treatment to England. His application to join the Flying Corps was accepted in 1916 and he returned to Australia, arriving on 21 June 1916, to undergo pilot training at Point Cook. After completing his initial flying training he embarked on HMT Ulysses and arrived in England on 28 December 1916. Training continued at the 23rd Training Wing, Royal Flying Corps (RFC) until No 69 Squadron (Australian) RFC (later No 3 Squadron, AFC) was sent to France with Lt Sandy as the Deputy Flight Commander of A Flight. No 3 Squadron, an Army co-operation squadron, was equipped with RE8's and initially stationed at Savy, and in 1917 at Bailleul, in France. On 17 December 1917, Lt Sandy and his observer, 559 Sergeant (Sgt) Henry Francis Hughes, of South Yarra, were flying over the battlefield ranging an 8 inch howitzer for 151 British Siege Battery when their RE8, serial number A3816, was attacked by six DVa Albatros Scouts between Deulemont and Armentieres. In the ensuing air battle the pilot of one German aircraft, Leutnant Rudolph Clauss, was wounded and forced to land in the lines of the 21 Battalion, AIF, where he was captured by the Australians, while in the battle above, Lt Sandy was joined by another 3 Squadron RE8 flown by Lieutenants Ernest J Jones and Keith Cecil Hodgson. The two RE8s fought the Germans for about ten minutes until a third RE8 flown by Lts Henry N Wrigley and John Riggall Blair appeared and the five remaining German aircraft retired. Capt Jones flew close to Lt Sandy's aircraft, still cruising normally on its 'beat', and concluded they were continuing their work spotting for the howitzer battery. Radio contact with Lt Sandy's aircraft ceased and the aircraft disappeared from its allotted area. The squadron tried to trace the aircraft and its crew without success until they were notified by No 12 Stationary Hospital at St Pol, a straight line distance of 75 kilometres south west from the scene of the aerial combat with the German aircraft, that an RE8 had crashed 8 kilometres north east of St Pol, near the Bruay to St Pol road. Lt Sandy and Sgt Hughes had been killed by a single armour piercing bullet that had first passed through Sgt Hughes and then Lt Sandy, killing them both. The aircraft was at full throttle and continued to fly until it ran out of fuel and crashed. Both men are buried in the St Pol Communal Cemetery Extension, Lt Sandy in grave H8 and Sgt Hughes in H10. While still missing, Lt Sandy had been recommended for an immediate award of the Military Cross and Sgt Hughes the Distinguished Conduct Medal; the recommendations were not approved. The Albatros that was forced down behind the Australian lines, serial number D.5390/17, was salvaged and later claimed by Australia, and is now in the collection of the Australian War Memorial.