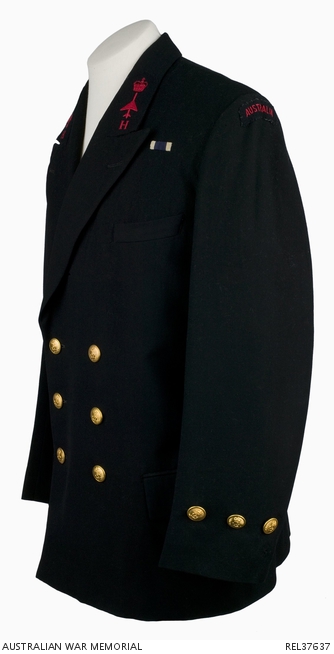 Navy blue wool serge double breasted coat with a welt pocket on the left breast and an inset pocket with rectangular flap over each hip. There are two rows of gilded brass buttons down the front of the coat and three similar buttons sewn across each cuff to indicate the rank of chief petty officer. The buttons have a plain raised rim and show a fouled anchor surmounted by a Queen's crown, with 'AUSTRALIA' beneath, all on a finely lined ground. The head of each sleeve bears a red embroidered 'AUSTRALIA' title. The turn back lapels have an embroidered buttonhole on each side. Above them are sewn red embroidered badges for an aircraft handler, showing a Queen's crown above a jet aircraft and the letter 'H'. A silk medal ribbon for the Naval Long Service and Good Conduct Medal is sewn above the breast pocket. The body of the coat is lined with black cotton twill and the sleeves with blue striped cream cotton twill. An inset pocket is set into the lining of the proper right breast and into the proper left waist. There is a yellow embroidered manufacturer's label inside the neck 'C.G.C.F.'. Another label, printed on white cotton beneath the inside breast pocket reads 'C.G.C.F. SIZE 5 1/4" R.A.N. MADE IN AUSTRALIA'.

Associated with the service of R37637 Kevin Leonard Kelly, born in Melbourne on 28 January 1931, who entered the Royal Australian Navy (RAN) in August 1948. Kelly qualified as an Aircraft Handler in May 1949, and then as an Aircraft Handler Class II in January 1952. Almost all of his sea-going service was in aircraft carriers: HMA ships Vengeance, Sydney and Melbourne. His shore going service alternated between HMAS Harman in Canberra, and HMAS Albatross, at Nowra, NSW, the home of the RAN Fleet Air Arm. He first served in HMAS Sydney from September to December 1950. In October 1954 he was posted for a year to HMAS Vengeance, sailing to Japan to embark the aircraft, men and equipment of the RAAF's 77 Squadron, returning to Australia after service in the Korean War. Venegeance then sailed to England to be returned to the Royal Navy. Kelly was a member of the crew of HMAS Melbourne, the RAN's new aircraft carrier, which made the return voyage from England to Australia. He remained with the ship until December 1956. He was again posted to HMAS Melbourne between September 1958 and July 1959, serving in the Far Eastern Strategic Reserve. A further posting to Melbourne followed between December 1961 and December 1963. In 1964 he was promoted to petty officer, and in April 1966 to chief petty officer. He was awarded the Naval Long Service and Good Conduct Medal in February 1965. Between 1967 and 1969 Kelly served in HMAS Sydney, making a number of voyages to South Vietnam to deliver troops and equipment.