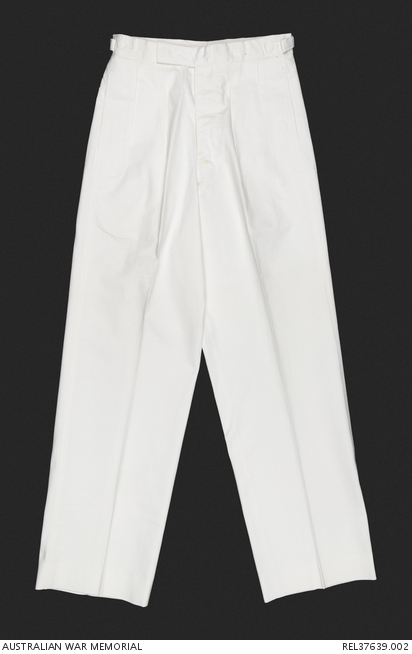 Pair of heavy white cotton twill trousers with a five button fly and extended waist band with a two hook and slide fastening. There are two pleats on either side of the front waistband. The fit of the waist can be adjusted by a tab and white metal slide sewn to the waistband above the side seams. A slash pocket is let into each side seam. There is an inset pocket fastened with a white plastic button over the right hip. Similar plastic buttons fasten the fly and a further six buttons are sewn around the inside of the waistband for the attachment of braces. The inside waistband is marked twice in black biro 'K L KELLY' and 'No 2 SUIT'.

Associated with the service of R37637 Kevin Leonard Kelly, born in Melbourne on 28 January 1931, who entered the Royal Australian Navy (RAN) in August 1948. Kelly qualified as an Aircraft Handler in May 1949, and then as an Aircraft Handler Class II in January 1952. Almost all of his sea-going service was in aircraft carriers: HMA ships Vengeance, Sydney and Melbourne. His shore going service alternated between HMAS Harman in Canberra, and HMAS Albatross, at Nowra, NSW, the home of the RAN Fleet Air Arm. He first served in HMAS Sydney from September to December 1950. In October 1954 he was posted for a year to HMAS Vengeance, sailing to Japan to embark the aircraft, men and equipment of the RAAF's 77 Squadron, returning to Australia after service in the Korean War. Venegeance then sailed to England to be returned to the Royal Navy. Kelly was a member of the crew of HMAS Melbourne, the RAN's new aircraft carrier, which made the return voyage from England to Australia. He remained with the ship until December 1956. He was again posted to HMAS Melbourne between September 1958 and July 1959, serving in the Far Eastern Strategic Reserve. A further posting to Melbourne followed between December 1961 and December 1963. In 1964 he was promoted to petty officer, and in April 1966 to chief petty officer. He was awarded the Naval Long Service and Good Conduct Medal in February 1965. Between 1967 and 1969 Kelly served in HMAS Sydney, making a number of voyages to South Vietnam to deliver troops and equipment.