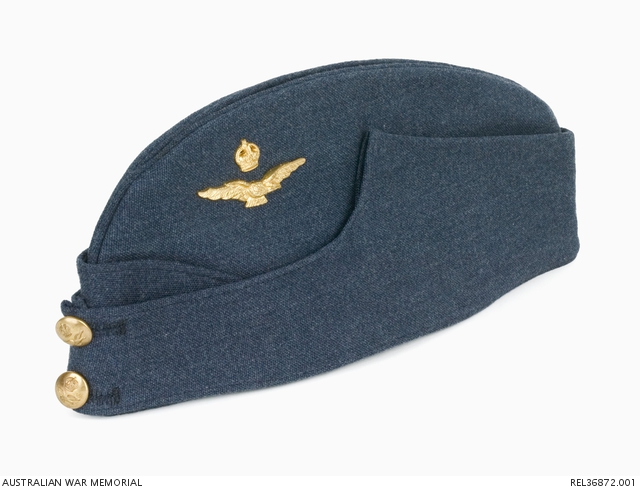 RAF blue wool barathea forage cap with two gilt RAF officer's buttons at the front and an officer's gilt crown and eagle badge secured to the left side of the crown. The cap is lined with RAF blue cotton and wool mix twill and has a black velveteen band around the inside lower edge. A diamond shaped manufacturer's label sewn inside the right side reads 'HILHOUSE & Co 11, New Bond Street, LONDON'. A green embroidered Cash's name tape, sewn upside down across the inner back seam reads 'AUDREY HOGAN'.

Jean Starling travelled to England from her home in Canberra, ACT in early 1939. She was working in London when the Second World War broke out, and subsequently enlisted in the Women's Auxiliary Air Force (WAAF). Trained as a specialist photographic interpreter, Flight Officer Starling served at Danesfield House, RAF Medmenham, located in Buckinghamshire. Initially set up as an RAF photographic interpretation unit, it was renamed the Central Interpretation Unit (CIU) at the end of 1941. By the end of 1943 the CIU was concerned with the planning stages of most RAF operations, and with every aspect of intelligence. In May 1944 it was renamed the Allied Central Interpretation Unit (ACIU) in recognition of the considerable number of American personnel attached to it. By the beginning of 1945 the ACIU housed 1700 personnel and had a daily intake of 25,000 negatives and 60,000 prints requiring analysis and interpretation. At the end of the war in Europe, in May 1945, the ACIU library housed 5,000,000 photographic prints, from which 40,000 separate reports had been produced. Jean Starling returned to Canberra after the war and worked in the Department of Prime Minister and Cabinet. She died in 1998.