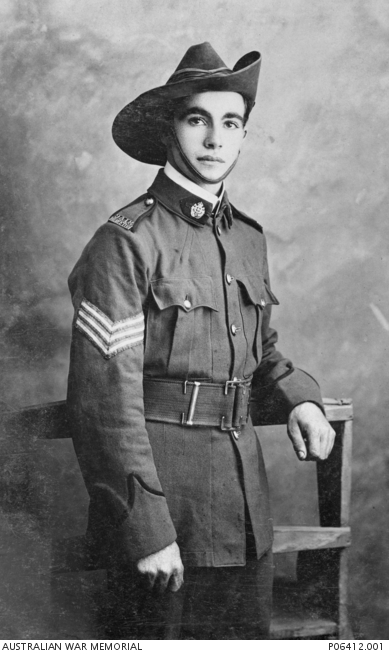 Pre-war studio portrait of 2143A Sergeant (Sgt) John Thomas (Blakie) Blake, 49th Battalion, of Brisbane, Queensland in the uniform of the Moreton Regiment, Citizens Military Forces (CMF). A British migrant from Liverpool, England, John Blake had emigrated to Australia in 1910, was a member of CMF in Queensland where he held the rank of Sgt, and was working as a fruit preserver before he enlisted in January 1916. An Acting Sergeant (A/Sgt) on embarkation, he left Australia for England with the 4th Reinforcements in August 1916 and reverted to the rank of Lance Corporal (LCpl) on arrival in France for service on the Western Front in December 1916. According to his Red Cross Wounded and Missing File, LCpl Blake was killed by a German sniper during the attack on Messines on 7 June 1917, aged 24. Despite attempts by the Red Cross to determine what had happened to LCpl Blake, his grave was never located.