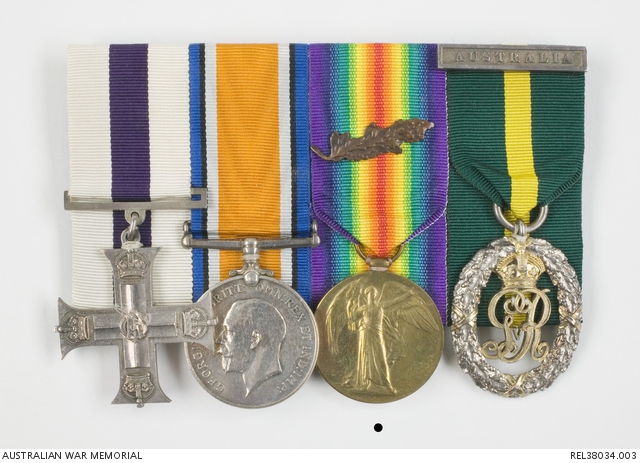 Associated with the service of Temporary Major John William Farrar. Farrar was born in Rylstone, New South Wales on 13 October 1889 and graduated from the University of Sydney in 1914 with a Bachelor of Medicine. He served in German New Guinea and Suva aboard the hospital ship HMAS Grantala from August to December 1914 before transferring to the Royal Army Medical Corps and seeing service on the Western Front.

Farrar served with the 9th Field Ambulance from July to August 1915, 2 Battalion, the Royal Scots from August to October and the 7th Field Ambulance from October to 9 March 1916. He returned to Australia aboard the invalid ship HMAT Ascanius where he remained on duty with the rank of Temporary Captain. On arrival in Australia Farrar took up civil employment as the Admitting Medical Officer at Royal Prince Alfred Hospital.

Farrar applied for a commission in the Australian Army Medical Corps on 22 June 1916 and embarked for overseas service on 30 September with the rank of captain. Farrar arrived in Plymouth on 19 November and proceeded overseas to France on 1 January 1917. There he was taken on strength by 1 Australian General Hospital (AGH), Rouen. He transferred to 6 Field Ambulance on 23 March, but was then transferred to 5 Field Ambulance on 28 March.

Farrer was posted to 4 Australian Field Artillery as the unit's Regimental Medical Officer on 1 January 1918. He was promoted to temporary major on 28 February and taken on strength by 3 AGH where he was appointed acting Registrar. Farrar served with this unit until 20 March 1919, when he reported to the Director of Medical Services in London.

Farrar was granted three months leave with pay before returning to Australia aboard HMAT Runic on 27 April 1919, where he remained on duty as a Medical Officer. He was awarded the Order of the British Empire on 3 June, his citation noting that 'as registrar of this hospital [3 AGH] during a very severe epidemic of Influenza he was of invaluable assistance. It was mainly through the excellence of his arrangements that the Hospital was able to cope so successfully with a very great number of cases'. Farrar was also mentioned in Sir Douglas Haig's despatch of 8 July for 'conspicuous services rendered whilst serving with the Australian Imperial Force'. On arrival in Australia, Farrar's appointment in the AIF was terminated on 3 August.