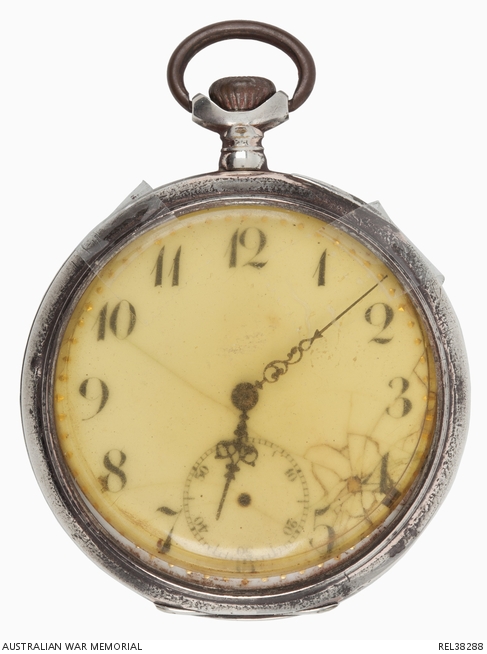 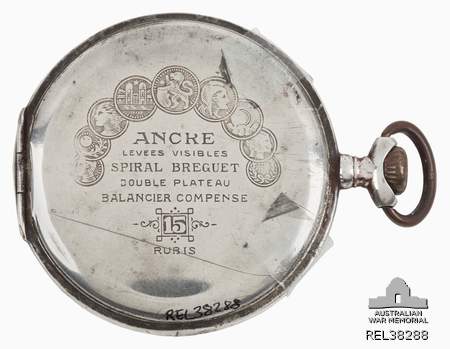 Silver pocket watch with yellowed and broken face. The reverse of the watch is decorated with nine circles containing images of awards. In the centre are engraved the words 'ANCRE LEVEES VISIBLES SPIRAL BREGUET DOUBLE PLATEAU BALANCIER COMPENSE 15 RUBIS'. These refer to the mechanism of the watch, which is probably Swiss, and translate as ancre (lever escapement); levees visibles (visible or jeweled pallets); spirale breguet (overcoil hairspring); double plateau (double roller); balancier compense (compensated balance wheel); 15 rubis (15 jewels). Inside the back cover is stamped the number '572377'.

This pocket watch was owned by Private Oliver George Pearce. Born in Adelaide, South Australia, in 1916 Pearce was farming with his father, a property called Pine Vale near Narrandera when the First World War began. He enlisted in the Australian Imperial Force, aged 19, on 16 May 1916 from the town of Cootamundra and embarked for service overseas with 3 Reinforcements, Light Trench Mortar Battery on 25 October.

When he arrived in England he was transferred to 33 Battalion and arrived in France on 1 May 1917. He was killed on 13 October that year at Passchendaele during the Third Battle of Ypres. Having received a wound to his head and chest he was among the walking wounded making their way back to the regimental aid post when he was killed instantly by shell fire. His service record notes that he was buried in February 1918, but there is no known grave listed. His name is inscribed on the Menin Gate Memorial in Belgium.