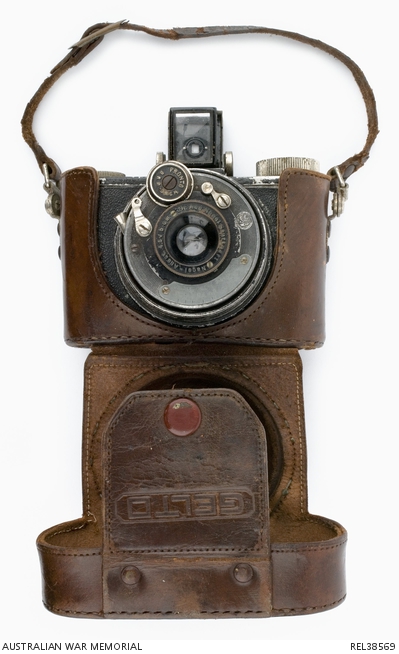 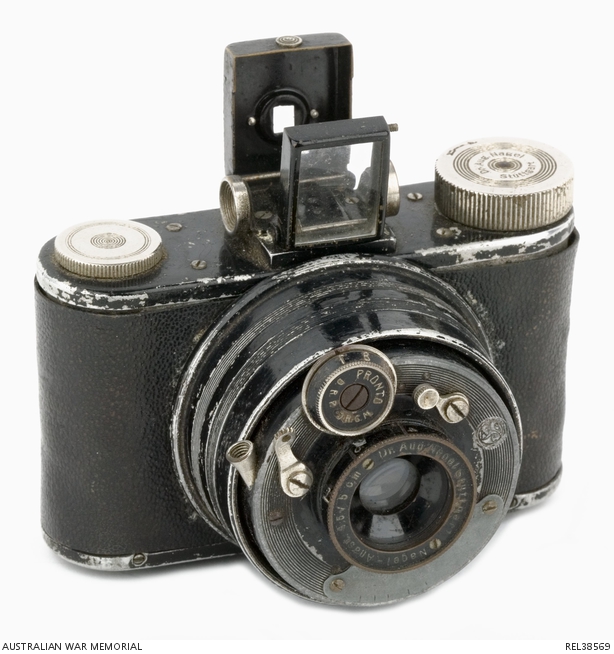 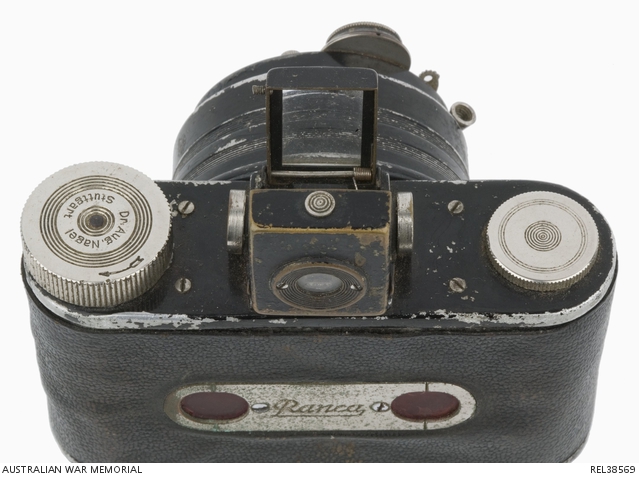 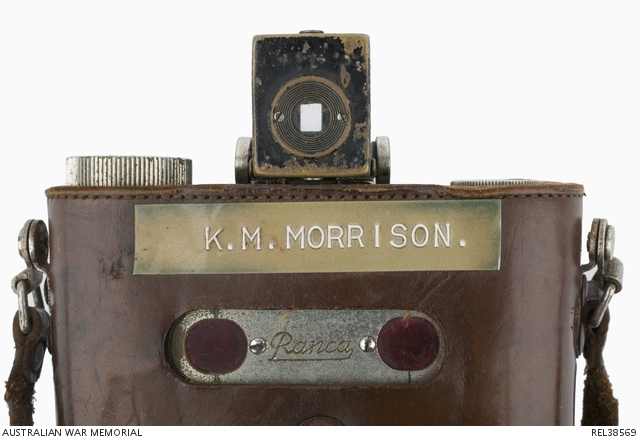 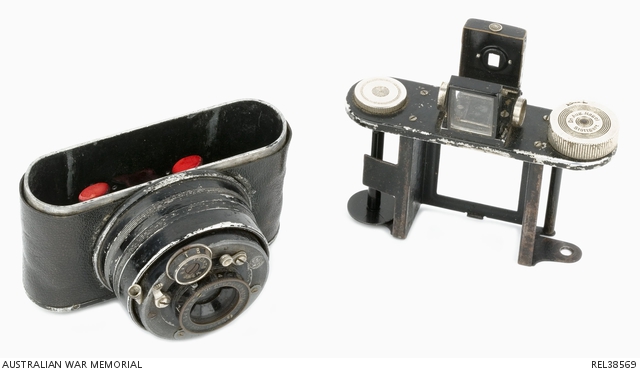 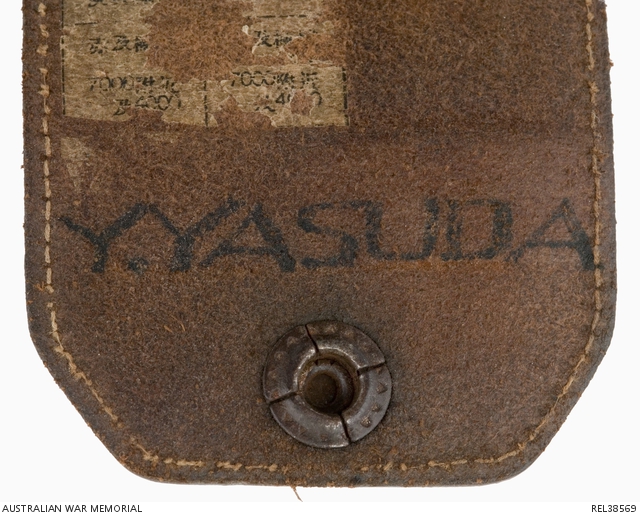 Small black Nagel pocket camera marked 'Ranca' on reverse in non-original Japanese Gelto leather camera case. Camera takes 3 x 4 cm 127 film. It is fitted with a wheel-set shutter marked 'Pronto DRP DRGM' and a Nagel Anastigmat 4.5 x 5 cm lens marked 'Dr Aug. Nagel Stuttgart'. The film advance roller is similarly marked. A small round badge mounted to the proper left of the lens features a symbol of three half-open shutter blades and the initials 'AGC'. A chromed locking lever mounted on the base (marked 'Made in Germany') releases the film carrier body, to which is attached the flip-up viewfinder. There are no mechanical connections between the lens/shutter assembly and the carrier body. A pair of red celluloid film viewing windows are mounted to the reverse. The main body is clad in black leatherette. The two-piece leather camera case is impressed 'Gelto' on the rear, top and front; however, the name on the leather lens section is upside down; this entire unit has been reattached or repaired using fishing line. It is fitted with a leather carrying strap which has been cut and is much shorter than expected. The upper section closes by a leather tongue fitted with a snap fastener; the inside of the tongue is marked clearly in pen 'Y. YASUDA'. A Dyno tape strip with the name 'K.M. MORRISON' is stuck to the outside of the lower section of the case.

Ranca brand camera made by Dr Augustus Nagel of Stuttgart in 1930 prior to the takeover by Kodak in 1932. Related to the service of S/10399 Stoker Kenneth Mervyn Morrison, of Maroubra, NSW, born 15 August 1927 who enlisted in the Royal Ausralian Navy on 2 May 1945 at Sydney. He states 'I attended Maroubra Public School in 1936 and learned to swim in the 'Bogie Hole' off Maroubra beach and at times watched the RAN ships sail up and down the coast and dreamt of one day sailing away on them'. Morrison realised his dream, serving aboard the 'Q' class destroyer HMAS Quickmatch from 1945 to 1947.

HMAS Quickmatch was one of eight 'Q' Class destroyers initially built for the Royal Navy but transferred to the RAN and was commissioned at Cowes, Isle of Wight, as HMAS Quickmatch (G92) on 14 September 1942 The ship commenced convoy escort duty on 5 October 1942. From May 1944 Quickmatch served with the British Eastern Fleet, based on Ceylon, which carried out a number of successful raids against Japanese ports over the following year. In October 1944 Quickmatch arrived in Australian waters for the first time and underwent a refit in Sydney from November to December 1944 and thereafter served mainly in Australian waters until March 1945. She then proceeded to the Far East as a unit of the British Pacific Fleet as one of the ships screening the Royal Navy carriers in support of the United States invasion in Okinawa and subsequent assaults on the Japanese home islands in July, including Honshu. After the cessation of hostilities, HMAS Quickmatch joined the occupation fleet, arriving in September 1945. In the three months from July to September 1946, in conjunction with HMA ships Quadrant and Quiberon, she undertook a range of naval duties in support of the occupation.

During these activities, Stoker Morrison recalls being in Kure 'and was supervising a Japanese working party including an interpreter [by the name of Yasuda] who had been in the Japanese Navy and spoke better English than most Australians. We started talking and he said that he had been a wool buyer in Australia prior to 1941. He asked me what part of Australian I came from and said he knew the area ... he also said he had lived in Maroubra and used to sit and watch the ships off Maroubra beach.' Amazingly, both men remembered an incident in 1936 when a firecracker almost burned down the post office. 'After a trade of goods, I received the camera and he received soap, cigarettes, sugar and chocolates. The camera was returned to the Australian Wool Industry, where my employment included research and experiment in the rural industry.' Morrison was discharged from the navy on 11 April 1947.