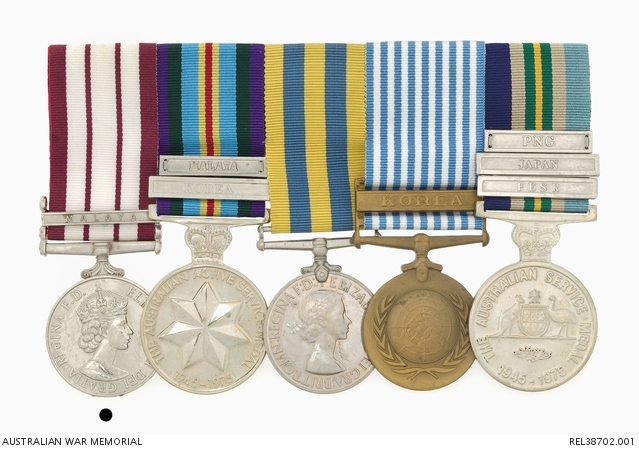 Associated with the service of Robert Henry Omond, born Melbourne, Victoria on 27 December 1929, who entered the Royal Australian Navy (RAN) as an Ordinary Seaman on 10 February 1947. Omond was assigned the service number R34186 and after initial training at HMAS Cerberus at Westernport, Victoria, undertook further training and work at various shore establishments, including HMAS Platypus (Sydney), HMAS Melville (Darwin) and HMAS Melville (Manus Island, New Guinea). His first seagoing posting came in August 1950 when he was posted to the heavy cruiser HMAS Australia for eighteen months. He was promoted to Able Seaman, in November 1950. In June 1951 Omond was posted to the destroyer HMAS Bataan, in which he saw service in the Korean War, until October 1952. His next postings were to aircraft carriers: HMAS Vengeance between May 1953 and February 1956, followed by HMAS Melbourne until August 1956. From December 1956 to August 1957 he served in HMAS Queenborough in the Far East Strategic Reserve (FESR), before transferring to the destroyer HMAS Warramunga. Omond left the RAN in February 1959. This medal, a late issue in nickel silver, rather than the original silver, is one of a large number issued to members of the RAN who had served in FESR, and whose service was not recognised by the Australian Government as a qualification for the medal until a number of inquiries had been held in the late 1990s.