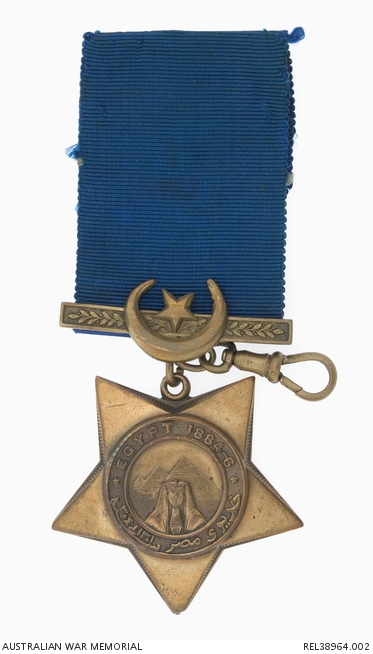 Khedive's Star. Unnamed as issued. The obverse shows the Sphinx with the three Great Pyramids in the background. Around this is a raised band, on the upper part of which is embossed 'EGYPT' followed by the dates '1884-6'. The lower part of the band is embossed in Arabic 'KHEDIVE OF EGYPT' with the appropriate date. On the reverse is the Khedive's monogram 'TM' surmounted by a crown within a raised band. The suspender is a small fixed loop attached between the two uppermost points of the star. A loose ring is attached to the loop joining a straight laureated bar bearing a crescent moon and a small five pointed star.

29 Private Charles Edward Downey was born in Woolloomoolloo, NSW, in 1861. Aged 23, he enlisted for service with D Company of the New South Wales Sudan Contingent on 18 February 1885. The Contingent was raised in response to the death of General Charles Gordon during the indigenous rebellion against the British-backed Egyptian regime in the Sudan. It comprised 770 infantry, artillery and medical personnel, and while they would be under British command, it marked the first time that soldiers in the pay of a self-governing Australian colony were to fight in an imperial war. Amongst much fanfare Downey and the Contingent embarked from Sydney aboard SS Iberia on 3 March, arriving in the Red Sea port of Suakin on 29 March. The Contingent saw little active service but did participate in a 30 kilometre march across the desert to Tamai where Downey was wounded in action on 3 April when he was shot through the foot during a minor skirmish. After six weeks' service the Contingent sailed for home on 17 May aboard SS Arab. Downey later married and moved to York, WA. He died on 14 January 1913, aged 51. Downey's photograph (P03950.001), discharge certificate and account book (PR04082) are also held in the Memorial's collection. His son, 82638 Harold Sydney Gordon Downey, and grandson, 84777 Harold Charles Downey both served in the RAAF during the Second World War. The family has continued the tradition of military service into the 21st century with two of Downey's great great grandsons serving in the Australian Defence Force.