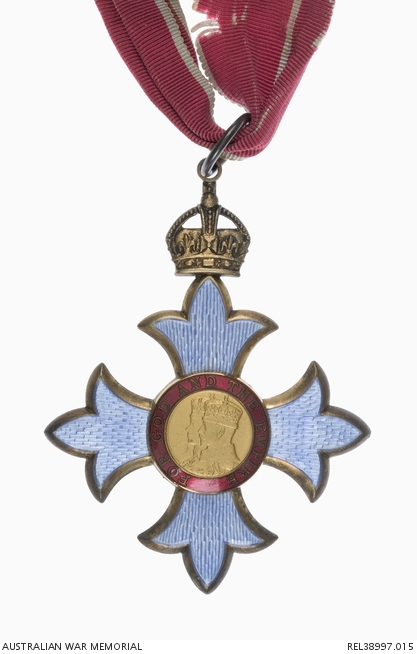 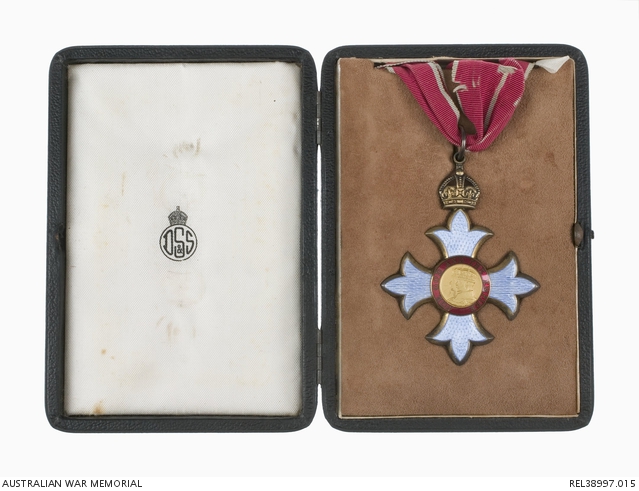 Neck decoration for a Commander of the Order of the British Empire, Military Division unnamed as issued.

William John Victor Windeyer was born on 28 July 1900 in Hunters Hill, NSW. He entered Sydney University at the beginning of 1918 to study law. In the middle of the year, the Sydney University Company was formed to provide the AIF with much needed reinforcements. Windeyer was one of the first to volunteer for service. The First World War finished whilst the men were still in camp in Liverpool and the company was disbanded. He joined the Sydney University Scouts directly after the war as a private. In 1925 he graduated in law and was admitted to the New South Wales Bar Association. He had been promoted captain the previous year. In 1929 Windeyer began lecturing at Sydney University in equity and commercial law, which he continued until 1940. He also lectured in legal history until 1936. In July 1929, he was promoted to major in what was now known as the Sydney University Regiment. In 1937, Windeyer was promoted to lieutenant colonel and took command of the regiment. This lasted until May 1940 when he enlisted in the Second AIF. At first he took a reduction in rank to major and was posted to Headquarters, 7 Division. He was sent to South Australia to command the 2/48 Battalion in early August and was promoted to lieutenant colonel at the end of that month. In November Windeyer and his battalion embarked for the Middle East. Windeyer led his battalion ably in the withdrawal to Tobruk and in the defence of the Tobruk fortress. He was later awarded the Distinguished Service Order for his actions during this time. In January 1942 Windeyer was promoted to colonel and was placed in command of 20 Brigade as acting brigadier. He led 20 Brigade through the fighting at El Alamein where he earned a Bar to his DSO. He embarked for Australia with 20 Brigade in January 1943, arriving in Sydney. After a period of training in Queensland, the brigade was moved to Milne Bay, New Guinea for amphibious operations training. Windeyer led his brigade in the assaults on Lae and Finschhafen and in the months of fierce fighting that followed. Windeyer was to be awarded the Companion of the Order of the British Empire (Military) for his leadership in this period. Windeyer next led his brigade in the Borneo landings and at the conclusion of the war took the surrender of Japanese forces at Kuala Belait, Sarawak in September 1945. In 1946, Windeyer transferred to the Reserve of Officers and resumed his legal career. He was appointed King's Council in 1949 and was elected to the Senate of the Sydney University, a position he held for ten years. In 1950, Windeyer resumed his service in the Citizen Military Forces (CMF) and was appointed temporary major general in July of 1950. In January 1951, he was promoted to major general and was placed in command of 2 Division. He was appointed Companion of the Order of the Bath (Military) in June 1953 and transferred to the Reserve of Officers in July. Windeyer was appointed to the bench of the High Court on 8 September 1958, a position he would hold until his retirement in 1972. Windeyer was created a Knight Commander of the Order of the British Empire later that year. In 1963, he was elevated to the Judicial Committee of the Privy Council. William John Victor Windeyer passed away in 1987.