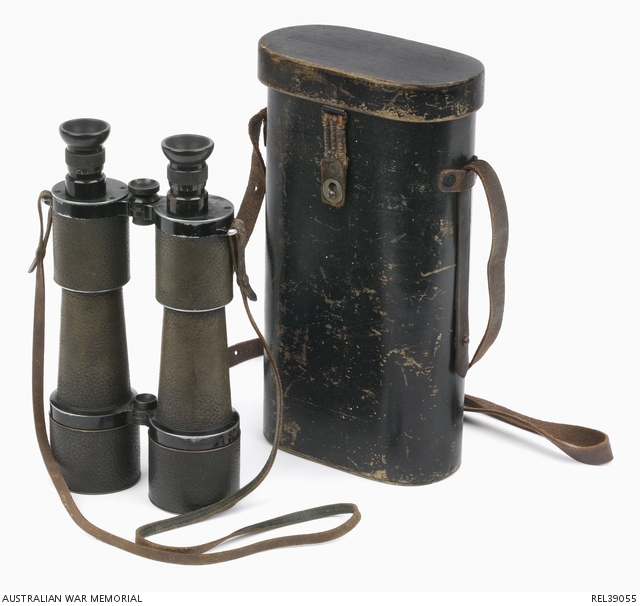 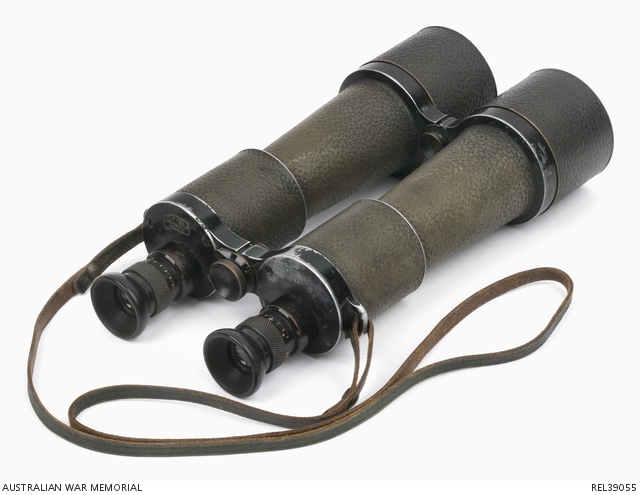 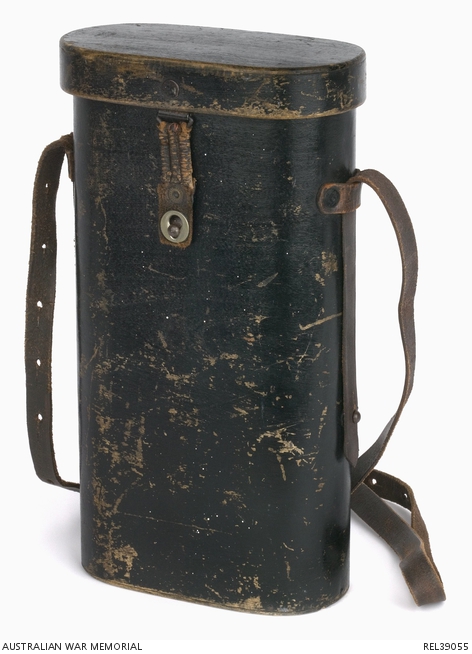 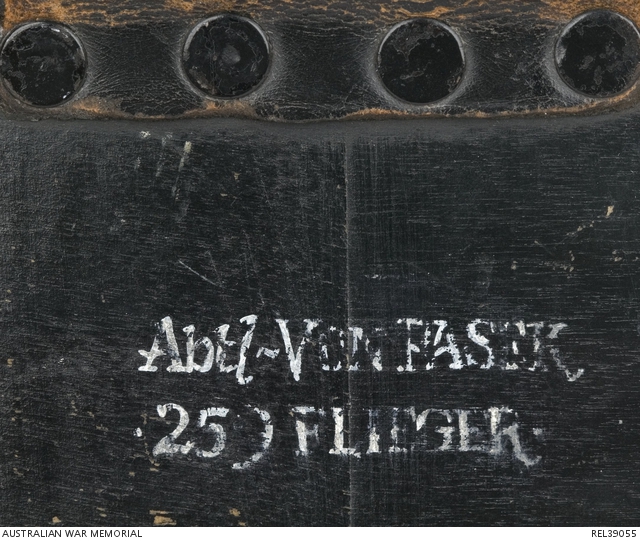 Pair of Carl Zeiss binoculars in their original moulded wooden case Employing the 'ABBE-KONIG' prism system, the binocular's magnification is x12 through 50 mm lenses. The eye pieces are individually tuned to achieve focus and they are marked from -5 to +5. The prism plates at the top of the binoculars are attached with four screws. The left plate has been stamped with the magnification and serial number 'D.F. 12X / 467975' with an outline surrounding and dividing the details. The right plate has the maker's details 'CARL ZEISS / JENA' stamped also with an outline similar to that on the left. There is no central focussing wheel all though there is a fixing knob designed to keep the binoculars in a fixed state during use. The body of the field glasses is covered with a textured black leather which provides grip for the user. The objective tubes at the end of the binoculars both have extendable brass coverings covered in the same leather as the body of the binoculars. The coverings are used to stop sun glare for the user and also stops light reflecting off the lenses when used in the field. A thin green leather strap is attached for wearing around the users neck. The wooden case is made up of a floor, a molded upper body, and a molded lid. The case also has a leather carry strap attached to each side of the case. The lid is attached to the case by a piece of leather which has been riveted to the lid and the case. The lid is secured to the case by a clip which is made up of three small springs which have been covered in material which has been attached to a leather tab containing the clip. The body of the case has a protruding stud for attachment. On the reverse side of the case has been painted 'ABTL - VON PASEK / -259 FLIEGER' in a decorative style with white paint. The inside of the case is not lined, but a felt pad has been inserted into the bottom of the case to protect the lenses from being damaged.

These binoculars were originally used by Leutnant Von Pasek who was an obesrver with 259 Flieger Abteilung (Artillierie) in the latter part of the First World War. It is unknown if Von Pasek's aircraft was shot down or crashed, but his binoculars came to be in the possession of acting Lieutenant Colonel Frederick Dawson during 1918. Frederick Lionel Dawson was born in Queensland on 5 October 1880. Before the outbreak of the First World War, Dawson served in the Point Curtis Infantry Regiment. He had been a lieutenant for eight years and a captain for two. He enlisted in the AIF on 17 August 1914 and applied for a commission. He was posted to the newly formed 25th Battalion in March 1915 with the rank of captain and was promoted to major on 23 April. Dawson embarked with his unit from Queensland on 26 June and disembarked in Alexandria in early August. August saw the battalion undertaking further training in preparation to their deployment as part of 7 Brigade to Gallipoli. The battalion arrived on Gallipoli during the night of 11 September and were put into the line the following day. Dawson was evacuated from the front line with an illness, spending six days recovering before returning to the line. On September 29, Dawson was made second in command of the battalion. On 14 November, Dawson was evacuated from Gallipoli suffering an ear infection. He was evacuated to Lemnos where he also developed rheumatism effectively finishing his Gallipoli campaign. With the campaign on Gallipoli over, the AIF had returned to Egypt and he was transferred to Cairo in January 1916. Dawson was pronounced fit in February and rejoined the 25th Battalion at Ismailia on 24 February. He was reappointed second in charge of the battalion three days later. On 14 March, the battalion embarked from Mineapolis bound for France. They disembarked five days later in Marseille and after further training were put into the line in April. The battalion took part in their first major battle at Pozieres in July, where they suffered heavy casualties. Dawson was evacuated sick in August 1916 and due to an extended recovery, did not return to France until March 1917. Initially he was posted to 7 Brigade Headquarters, where he arrived on 17 March. He returned to the 25th Battalion on 1 April. On 31 May, Dawson was posted to England to take command of 7 Training Battalion. He returned to his battalion in France on 28 November. Dawson was promoted to acting lieutenant colonel on 1 December and took command of the 25th Battalion. Dawson led his battalion into the line on Christmas Eve, relieving the 27 Battalion in the St Yves sector. The next major action the Battalion was involved in was defending Amiens against the German spring offensive in April 1918. On 24 May 1918 the battalion, who were occupying the town of Mericourt-sur-Somme near Morcourt, came under a sustained bombardment lasting from 1 am until 2.30 am. The Germans used high explosive and gas shells and caused heavy casualties. The battalion suffered 1 officer and 16 other ranks wounded and 1 officer and 86 other ranks gassed. Over the next month an enquiry was held into the severity of the casualties suffered by the battalion. Dawson was well supported by his officers, but the enquiry found his command during the situation to have been lacking. He was relieved of his command and reduced to major on 21 June 1918 and was transferred to 20 Battalion. Dawson tried to have the verdict overthrown by appealing, but to no avail. He resigned his commission in late July and requested a return to Australia. General Monash granted the request and Dawson was transferred to AIF Headquarters in London to await passage home. Dawson left England on 20 October 1918 and arrived back in Australia on 3 December. Dawson was discharged from the AIF on 19 February 1919.