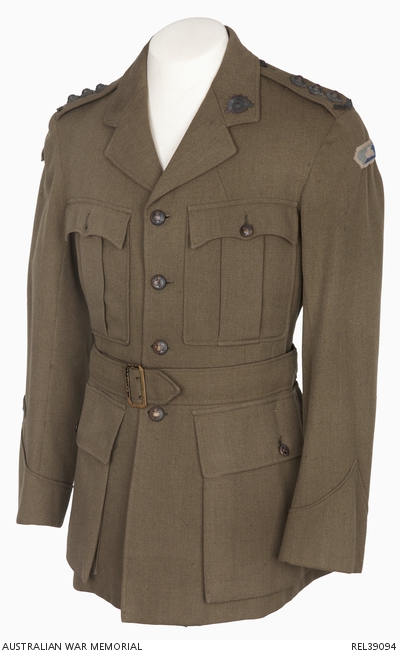 Second World War Officer's service dress tunic. It is a four button, open collared wool tunic. The left collar has a Rising Sun in place, the right collar Rising Sun is missing. The tunic has shoulder straps bearing the rank of captain with 'AUSTRALIA' shoulder titles and are secured by Australian Military Forces brass buttons. At the top of each sleeve is the colour patch of the 2/4th Armoured Regiment. On the forearm of the right sleeve is a blue chevron to denote one year's active service. There are two box pleated breast pockets with three point pocket flaps and two expandable pockets with straight pocket flaps below the waist. The pockets are secured with Australian Military Forces brass buttons except for the right breast pocket where the button has broken. The waist of the tunic has two belt loops, one sewn each side of the tunic. There is a wool belt attached by button loops to the jacket. The belt has a rectangular, double clawed brass buckle attached to the left side of the belt using the double claw. The right side of the belt has a pointed tip and one pair of holes punched through the fabric and sewn to avoid fraying. The rear of the jacket has a single vent extending up to the lower back. The tunic is lined with polished cotton and has an internal pocket cut into the lining under the left breast pocket. The maker's tag has been sewn into the reverse of the internal pocket. It is a white tag with red cotton lettering 'PEAPES OF SYDNEY'. Also on the tag are the owner's details that have been typed onto the label 'CAPT. MCGLYNN / M. 10960. D.31/5/44". The inside of the collar has had a polished cotton loop added for hanging on a hook.

Associated with the service of NX203390 Captain Ronald William McGlynn, who was born on 28 October 1915 in Sydney, NSW. McGlynn was studying medicine at Sydney University when the Second World War began. He enlisted in the Second AIF on 4 September 1941 at the Sydney University recruiting station, but his enlistment was deferred until after his studies were completed. On 10 August 1944, McGlynn was called up for service as a captain in the Australian Army Medical Corps (AAMC). He was initially posted to the AAMC training battalion before being posted to 54 Australian Camp Hospital, based at Wagga Wagga, NSW. On 2 February 1945, McGlynn was appointed Regimental Medical Officer for 2/4 Armoured Regiment. He embarked from Townsville on 29 March, disembarking in Lae on 2 April. He joined his unit in the field three days later. On 10 April, McGlynn was evacuated to 3 Casualty Clearing Station with a peptic ulcer. He was transferred to 2/7 Australian General Hospital in Lae on 20 April before being evacuated by air to 2/14 Australian General Hospital in Townsville arriving on 24 April. Upon his recovery, McGlynn was posted to 2 Australian Blood and Serum unit located in the Sydney Hospital. He was later admitted to 113 (Concord) Military Hospital where he was treated for a duodenal ulcer. McGlynn was discharged from hospital on 10 January 1946 and was discharged from his military service on 21 January 1946.