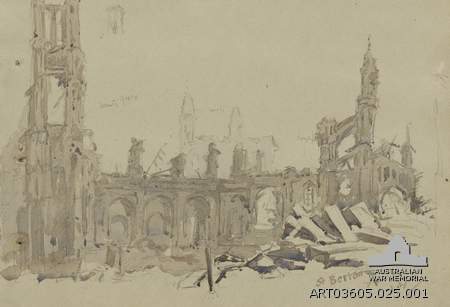 Double leaf with watercolour drawings recto and verso attached to scrapbook leaf. Recto: depicts a bomb-damaged church in Ypres. Verso: Fricourt - Somme, depicting a landscape sketch of the Fricourt commune in the Somme region. Benson describes the scene: "An early morning sketch [of] Fricourt. The British were shelling the area on the left where some very heavy fighting had just taken place. Australian troops were not in action on the Somme at that time." This reconnaissance sketch is dated: ' 5am July 19th, 1916 '.