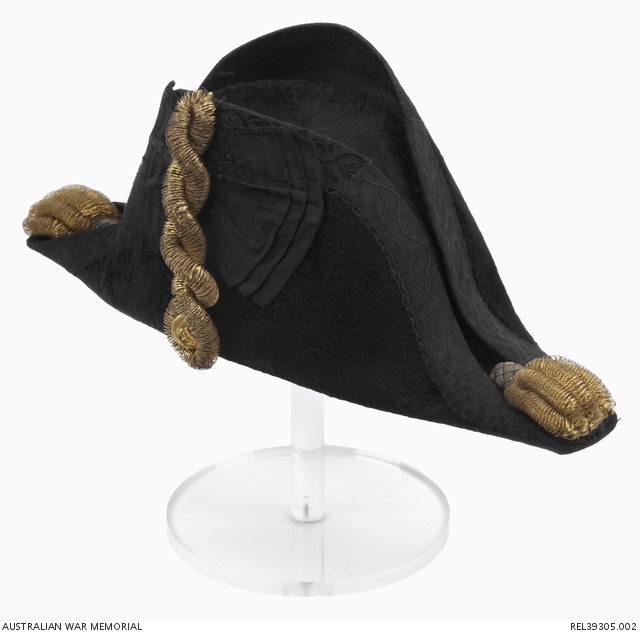 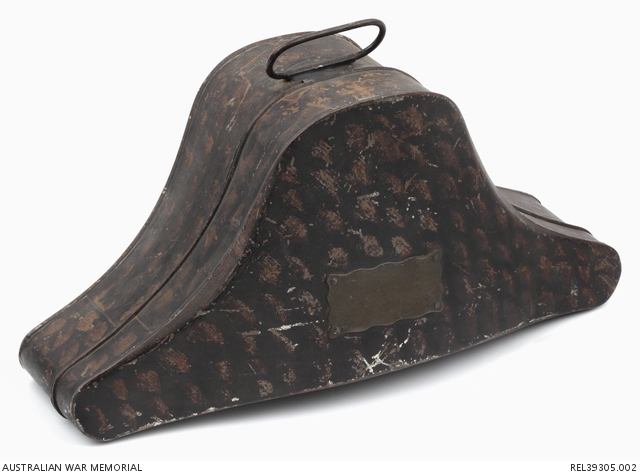 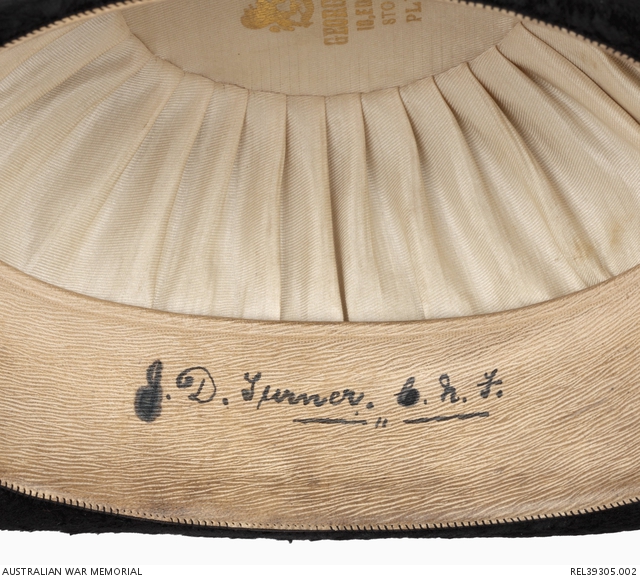 Naval officer's black 'beaver' cocked hat lined with loosely pleated white silk and a leather sweatband. The upper edged of the hat is edged with black silk lace woven in an oak leaf and acorn pattern. The right side bears a black silk ribbon cockade and a single twist of bright gold bullion looped around a gilded brass Royal Navy officer's button. The button bears a Tudor crown atop an anchor. Each end of the hat bears an inset tassel consisting of five small gold bullions mounted above five gold and five blue bullion eyes.

Associated with the service of Lieutenant John Denzil Etoile Turner. Turner was born in St Albans, England on 3 December 1864. He enlisted in the South Australian Naval Force on 24 October 1884 and joined the crew of the newly completed warship HMCS Protector. The Protector was South Australia's only warship at this time and as such was employed to patrol the Colony's coastal waters. Turner was promoted to petty officer in 1886 but the ship's crew was retrenched in 1894. Turner was retained by the Government as a gunnery instructor and in 1896 was promoted to the rank of chief gunner instructor. In 1900 Turner was further promoted to gunner and instructor aboard HMCS Protector during the ship's deployment to China. During the nineteenth century China had come increasingly under the influence of foreign nations. This domination was resented by most Chinese and throughout 1899 militant societies including a patriotic group called the 'Righteous and Harmonious Fists', the members of which Europeans called 'Boxers' began to attack foreigners in Northern China. By March 1900 the uprising had spread beyond these secret societies and western powers decided to intervene. The Protector was provisioned and fuelled and sailed for China on 6 August. The previous month Turner had arranged with the Adelaide Advertiser to act as the paper's Special Correspondent during the ship's passage to China. He was to write from every port along the way, giving full particulars of the work done by the vessel and crew. The Protector reached Manila at the end of August and Hong Kong by 9 September. At this point the ship became attached to the 'British Field Force in China'. On 19 September, the Protector steamed for Woosung, arriving there four days later. The ship was in Shanghai on 26 September before arriving at the Tartar city Shan Hai Kuan on 11 October, the site of the Boxer uprising. However by this time the Boxer Army had already retreated. The ship then left for Shan Hai Kuan on 19 October, and returned to Hong Kong Harbour on 12 November. The Protector reached Brisbane on 14 December and finally Adelaide on 6 January 1901. On 1 October 1905 Turner was promoted to the rank of chief gunner in the Commonwealth Naval Force. He was Assistant to the District Naval Officer, Port Adelaide, responsible for the South Australian Volunteer Naval Cadets formed at the Largs Bay Naval Depot in 1907, and for the Cadets of the Universal Training Scheme (UTS) when that scheme came into force in 1911. Turner was promoted to lieutenant on 1 January 1914 and transferred to the depot ship HMAS Penguin berthed at Garden Island where he was Assistant District Naval Officer. On 1 September 1916 Turner was appointed District Naval Officer, Thursday Island where he formed and operated the Torres Strait Patrol Service. After the war he was appointed Sub District Naval Officer and Executive Officer of the Birkenhead Naval Depot on 13 October 1919. In 1920 Turner was Officer of the Guard for the arrival of His Royal Highness The Prince of Wales. Turner's son, Sub Lieutenant J G J Turner, Royal Australian Naval Reserve, was Second Officer of the Guard. Promoted to the rank of lieutenant commander on 1 May 1922 Turner was transferred to the Retired List on 1 November. At the time of his death on 24 October 1949, he was the last surviving officer of the crew who served aboard HMCS Protector during the Boxer Rebellion.