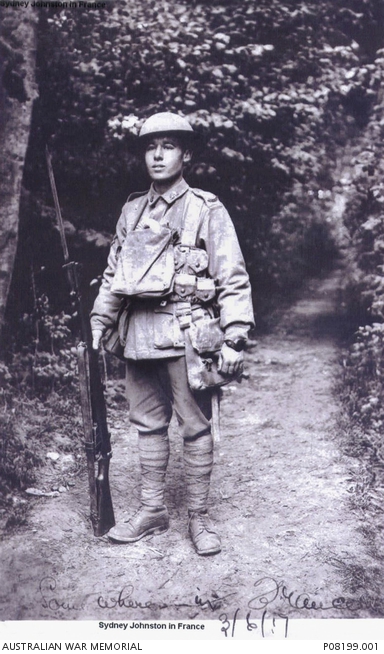 Informal outdoor portrait of 3580 Private (Pte) Sydney Joseph Johnston, 31st Battalion, of Bundaberg, Qld, standing on a path in a wooded area 'somewhere in France'. In a letter to his family he described the location as a 'green tunnel'. A station overseer prior to enlistment, Pte Johnston embarked with the 8th Reinforcements from Brisbane on HMAT Boorara on 16 August 1916. He was allocated a new service number, 3580A, and was promoted to Corporal (Cpl). He was killed in action on 29 September 1917 at Polygon Wood, aged 21. Cpl Johnston has no known grave and is commemorated on the Ypres (Menin Gate) Memorial, Belgium.