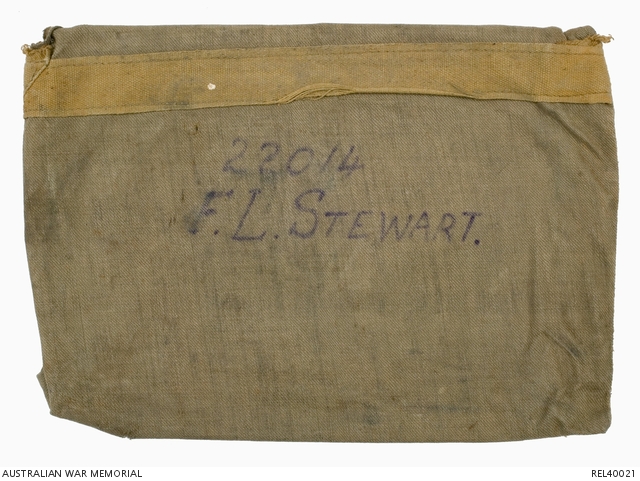 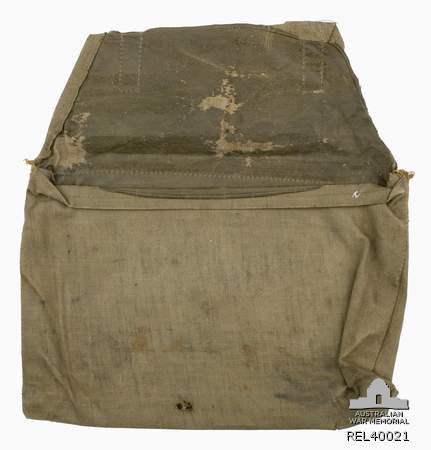 Rectangular khaki cotton drill personal equipment pouch with fold down flap at front. There are the remains of two khaki cotton ties sewn to the end of the flap which may have assisted in securing it. A separate reinforcing cotton tape is sewn across the rear where the flap folds, below which is marked in indelible ink '22014 F. L. STEWART'. The interior is rubberised.

Small pouch, probably used for toiletries, belonging to 22014 Bombardier Fergus Lilburn Stewart, of Richmond, Victoria, a salesman who enlisted at Melbourne Town Hall on 6 January 1916 aged 21 years. Stewart embarked for overseas service from Melbourne on 20 May 1916, aboard HMAT 'Medic' , as a reinforcement for 23 Howitzer Brigade, and continued his training in England until moving to France on 31 December. Six days later he was transferred to 27 Battery, 7 Field Artillery Brigade (7 FAB).

During 1917 he was gassed twice but recovered on both occasions to return to his unit. On the first occasion, the War Diary for 7 FAB notes his unit was stationed at Armentieres on 16 February 1917, when 'between 12.30 & 2.30 pm enemy shelled 27th Battery with 5.9 inch HE, shrapnel, and lachmymatory and suspected gas shells. No damage was inflicted on equipment or personnel with the exception of 5 men who were attended to for gas poisoning. Group retaliation was carried out'. Stewart's second gassing occurred on 6 June 1917 at Ploegtsteert, where the War Diary notes: 'from 27 May to 6 June a continuous bombardment of Enemy's trenches and communications was carried out in addition to covering fire for raids and Corps and Army practice barrages. During this period the Batteries of 'K' Group were subjected to very heavy hostile fire and gas bombardments.'

After suffering a bout of influenza in February 1919, Stewart was returned to Australia on the transport 'Armagh' and discharged on 2 July 1919.