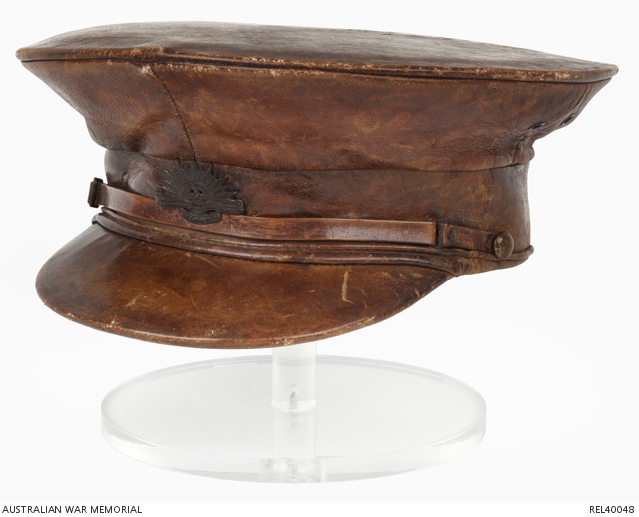 Brown leather peaked cap with leather sweatband, and chinstrap secured at each side by a plain domed brass button. An oxidised brass Rising Sun hat badge is attached to the centre front. The peak is lined with green leatherette and the crown with brown cotton twill.

Kenneth Arthur McWells (also spelt MacWells) was born at Adelong, New South Wales. He was working as a farrier at Queenstown, Tasmania, when he enlisted in the AIF on 23 August 1914 at the age of 27. After training in Hobart he was assigned to C Squadron, 3 Light Horse Regiment as a private shoeing-smith, with the service number 456. He sailed for Egypt from Hobart aboard the transport HMAT A2 Geelong on 20 October.

When the regiment landed without their horses at Gallipoli in 1915, McWells and his fellow farriers were left in Egypt to attend to the animals. It may have been at this time that he renewed his interest in motorcycles, which he had learned to ride on the family farm at Adelong, as motorcycle racing was becoming a popular pastime among the British population in Egypt. In March 1916, McWells transferred to the Army Mechanical Transport Service at Gamrah, Egypt. The unit sailed for France in June, arriving at Rouen the following month.

On 5 August McWells transferred to 4 Australian Division Ammunition Sub-Park as a despatch motorcycle rider, with the rank of driver. On 10 December 1916 he was accidentally knocked from his motorcycle, sustaining broken fingers to his right hand, head injuries, and losing the skin from the right side of his face and nose. He was evacuated to 38 (British) Casualty Clearing Station, then to 9 (British) General Hospital, before being transferred to England for treatment, aboard the hospital ship Carisbrook Castle.

McWells was treated at the 1st Southern General Hospital until March 1917, when he was moved to 1 Australian Auxiliary Hospital at Harefield. Here, McWells was assessed as suffering from neurasthenia, or shell shock. However, his medical record states that it took him some months to learn to walk again after his accident, and he had trouble keeping down food for a similar period, suggesting that he may have suffered brain damage in the accident. McWells was discharged to No 2 Convalescent Depot at Weymouth in June 1917. He appeared to have made a full recovery, but a decision was made to send him home and he returned to Australia aboard the troopship A34 Persic in December. He was discharged from the AIF in March 1918.