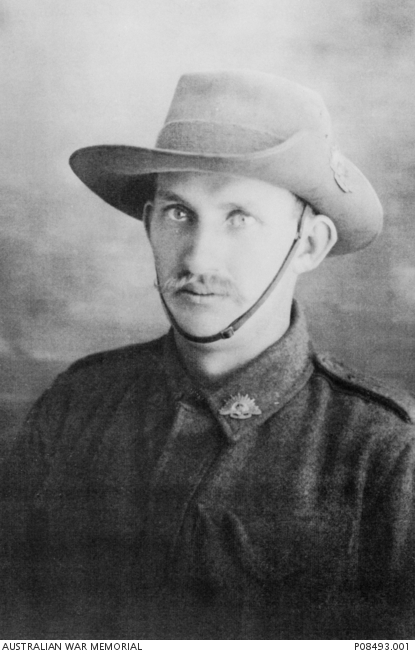 Studio portrait of 2715A Private (Pte) Jasper Jens Iverson, 9th Battalion, of Urbenville, Kyogle, NSW. A grazier prior to enlisting in August 1915, Pte Iverson embarked from Brisbane with the 6th Reinforcements on board HMAT Seang Bee (A48) on 21 October 1915. He was hospitalised with mumps upon arrival in the Middle East and rejoined his unit on 28 February 1916. They arrived in France for service on the Western Front on 3 April 1916. Pte Iverson sustained a gun shot wound to the head in action at Pozieres, France, on 22 July 1916. He was sent to England for treatment, and discharged from hospital on 20 October 1916. He was returned to France in December and rejoined his battalion in January 1917. A week later he was transferred to the 1st Division Salvage Company. He rejoined the 9th Battalion on 11 June 1917. On 4 October 1917 Pte Iverson and another soldier were carrying barbed wire and other materials to a captured German pill box located between Zonnebeke and Polygon Wood, Belgium; the Australian troops referred to the captured pill box as "Anzac House". A shell burst near the men and Pte Iverson sustained shrapnel wounds to his chest. He died two hours later at a nearby dressing station. Pte Iverson was 29 years of age.