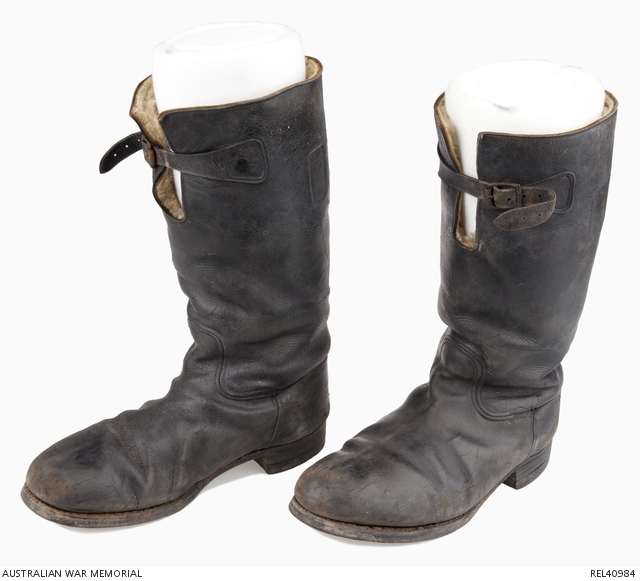 Pair of rubber soled black leather flying boots. The upper neck of each boot features an adjustment strap which is fastened by means of a plated steel buckle. The inside upper portion of each boot is lined with white wool fleece. Inside each boot is a pair of leather pull tabs, one pull tab impressed with the manufacturer's name, the other the size. Handwritten on a pull tab in the right boot in black ink are the initials 'M G'.

Bert Augustus 'Mick' Grace was born was born in Sydney, New South Wales in 1912. He was employed as a company director when he enlisted in the RAAF on 29 April 1940. He had learned to fly before the war, and after training at Mascot, New South Wales and Archerfield, Queensland he was commissioned as a Pilot Officer in November 1940.

Grace embarked for England in December 1940, and after further operational training was posted to 258 Squadron RAF in March 1941, flying Hurricane fighter aircraft. He was promoted to Flying Officer in May.

In September 1941 Grace was posted to 453 Squadron RAAF at Singapore, flying Brewster Buffalo aircraft. The squadron moved to Ipoh in northern Malaya in mid-December to meet the Japanese invasion. During this move the Australian pilots engaged the Japanese in combat for the first time, and Grace claimed his first aerial victory. The squadron was withdrawn to Singapore Island ten days later in the face of the swift Japanese advance. Operations against a numerically superior Japanese force continued from Singapore, and on 17 January, Grace and another Australian pilot claimed three aerial victories near Malacca. By February the squadron's position on the island became untenable. The unit was withdrawn to Sumatra ten days before the fall of Singapore, returning to Australia in March.

Grace was posted to the newly formed 76 Squadron in March 1942, one of the first Australian squadrons to be equipped with the P-40 Kittyhawk. After several months training with their new aircraft, the squadron deployed to Port Moresby in July 1942, and moved to Gurney Field at Milne Bay in August, where they and 75 Squadron played a critical role in halting the Japanese amphibious assault.

Grace's squadron was relieved in September 1942 and returned to Australia. The following month he was posted to 9 Operational Group as a staff officer in charge of training. During this period he received notification of his being awarded the Distinguished Flying Cross, mainly for his skill in the Milne Bay operations.

Grace was promoted to Flight Lieutenant in April 1943, and was posted to 2 Operational Training Unit as a flying instructor in the same month.

In March 1944 he was given command of 82 Squadron. Initially destined for Hughes Airfield in the Northern Territory, the squadron were instead based at Townsville, Queensland. After a period of training, Grace and his squadron deployed to Port Moresby in August 1944, moving to Noemfoor Island in September. 82 Squadron were engaged in patrolling and strafing flights against enemy installations, airfields and shipping. Grace was promoted to Squadron Leader in January 1945.

Bert Grace was discharged from the air force in September 1945.