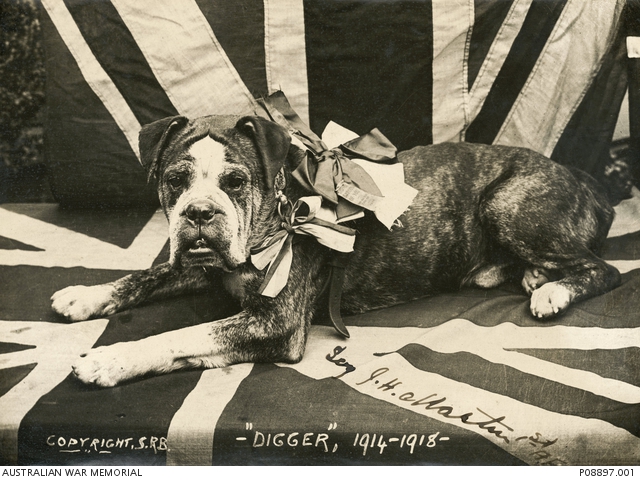 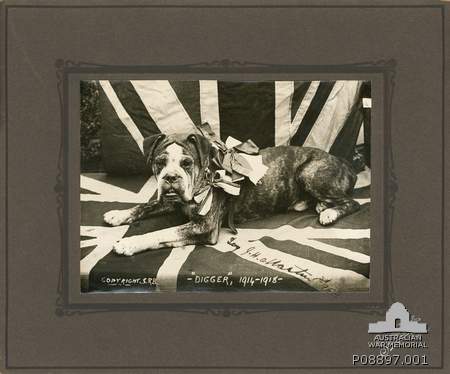 Studio portrait of Digger, a dark brown and white bulldog, posed on an ensign. Digger accompanied his owner, 24 Sergeant James Harold Martin, during his service overseas and is said to have served three and a half years with the AIF. Martin, an electrician from Hindmarsh in South Australia enlisted on 18 September 1914, at the age of 22. Digger seems to have been a stray dog that attached himself to soldiers training at Broadmeadows and followed them down to the troopships. Martin adopted him as a mascot and he and Digger sailed from Melbourne on 20 October 1914. Martin served initially with the 1st Divisional Signal Company on Gallipoli, but transferred to 2nd Divisional Signal Company in July 1915. He remained with the Company, attached to the Engineers, during his service on the Western Front in France and Belgium. Martin returned to Australia on 12 May 1918 and was discharged medically unfit. Digger accompanied him as strict quarantine regulations relating to the arrival of dogs in Australia from overseas did not come into force until June 1918. He and Digger settled in Sydney. Digger had been wounded and gassed at Pozieres in 1916 and needed cod liver oil for his burns. This was expensive so a photographic postcard of Digger, wearing the inscribed silver collar made for him on his return to Australia, with patriotic red, white and blue ribbons attached to it, was produced and the money realised from its sale used to buy the oil. It is said that the dog was also presented with a free tram and rail pass so that he could accompany Martin. Digger died, as an old dog, on Empire Day (24 May - year not known) when he was frightened by the celebratory fireworks. Thinking he was under fire again he attempted to jump the fence but failed and fell back with a burst blood vessel. Digger managed to crawl back into the house and died on Martin's bed. Martin was in the Prince of Wales Hospital at Randwick at the time, but he arranged through Mrs J A Little, a volunteer who visited the hospital twice a day to the help the soldiers there, to have Digger's hide tanned. After Martin's death the hide and collars were passed to Mrs Little. Her daughter recalled that the hide was displayed on the floor and that 'nobody put a foot on it's his head was propped on a stool so that everyone could see him, he has been loved by all'. This image is signed by Sergeant Martin.