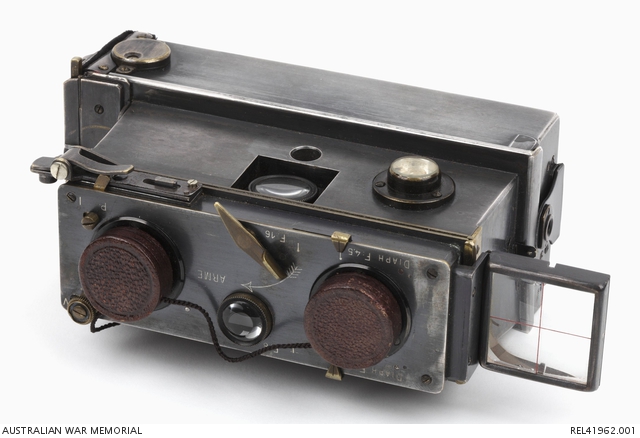 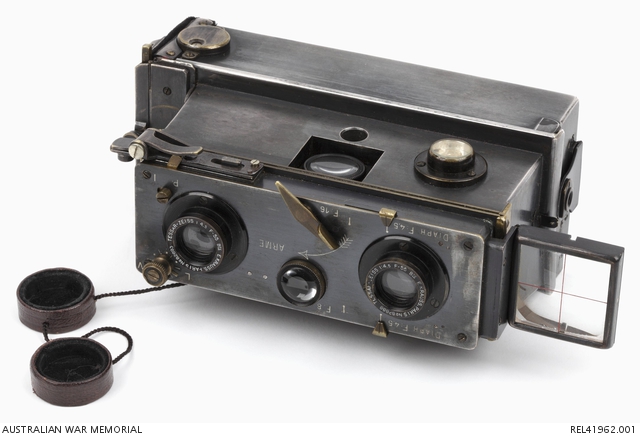 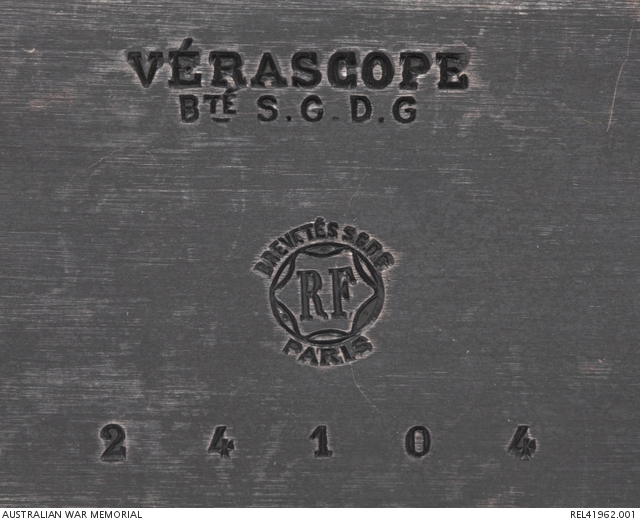 Verascope stereoscopic camera with steel and brass body. The front of the camera is equipped with two adjustable apeture F 1:4.5 (f=55) Tessaro Zeiss lenses, (each labelled on the camera 'DIAPH F:4.5'), positioned approximately equal to the width of the human eyes - the resulting exposure produces two prints that are slightly different from each other, and allows the illusion of 3-D viewing when viewed with a stereoscope viewer.

There are two sliding controls top and bottom with which one can control the apeture width. Each lens is covered with a leather lens cap, lined on the inside with black velvet. These are linked together by a stout black thread and the thread is joined to a spirit level on the upper part of the camera. The front also features a brass lever which arms ('ARME') the shutter; and a steel shutter release which can be operated manually or by a shutter cable release (not included with this example).

One side features a flip-up glass direct viewfinder with red crosshairs applied to the glass - this is kept flat against the camera by a steel catch when not in use; the other is an angled viewfinder set equidistant between the lenses (associated with a prism arrangement inside the camera), with black crosshairs.

The film plate container or magazine at the rear of the camera is a sliding arrangement which advances the film (a unique 45 x 107 mm format of twelve glass plates) via a flip up metal handle; a counter at the base of the plate container (giving the number of exposure used, numbering 1 to 12) is enclosed in brass. In addition, the entire plate container can be removed and changed when the film has been exhausted. An impressed marking on the rear of the camera notes 'VERASCOPE / Bte S.G.D.G. / [mark of Richard Frere, Paris] / 24104'

Camera owned and used by 14529 Arthur Dumas Whitling, born 1876 at Parramatta, NSW, a civil servant who was 38 years old when he enlisted on 13 July 1915. Assigned to the Australian Army Medical Corps, Whitling was promoted to Corporal the day after his enlistment and Lance Sergeant (Clerk) on 12 August 1915. He joined the Australian Convalescent Depot departing from Sydney aboard HMAT Orsova on 14 July 1915.

Although Whitling was promoted to Staff Sergeant on 7 September 1915 and to Warrant Officer Class 1 on 1 March 1916, these appointments were never confirmed, resulting in Whitling's rank and dates of promotion becoming the subject of an internal AIF investigation. The result, in late 1919, was confirmation of his rank as Staff Sergeant but not as Warrant Officer. Whitling had a few things to say about this, and in his correspondence states 'As showing the muddle the records in my case were, I may instance the fact that whilst I held the position of Chief Clerk at the No 1 Australian Aux Hospital, Harefield Park, England, the OC Records London wrote for particulars regarding me, "as we have no trace of this man on record". That was strange, as I was one of the original members of the London Staff and had been paid at Headquarters for over a year!!'