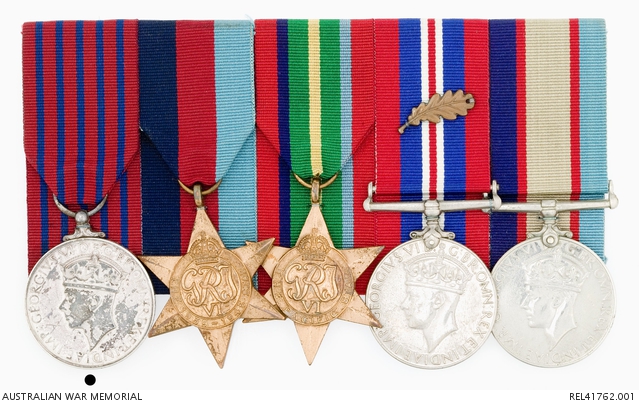 George Medal. Impressed around the edge with recipient's details.

Associated with the service of VX104461 Sergeant Jack Allen Charles Knight. Knight was born on 20 April 1921 in Camberwell, Victoria. After leaving school, he became a bricklayer and builder working in the inner suburbs of Melbourne.

He enlisted for service in the 24th Australian Infantry Battalion, Citizen Military Forces (CMF) on 13 May 1941 at Surrey Hills and was allocated the service number V40964. He went into camp at Seymour for basic training on 5 August and after completing his training returned to his civilian employment. Knight was called up for full time military service on 18 December and joined his unit in camp back at Seymour.

Knight went absent without leave (AWL) from midnight on 24 January 1942 until 6 am the following morning and after being charged, was fined 3 pounds and forfeited one day’s pay. He was promoted to lance corporal on 14 May before moving with his battalion to Queensland later that month for jungle warfare training. Knight was transferred to the Second AIF on 23 July and allocated a new service number, VX104461. However, he remained with the 24th Battalion.

He was detached to a weapons training school at Redbank on 23 September and after successfully completing his course, rejoined his unit on 27 October. Knight was promoted to corporal on 13 February 1943 and two weeks later, embarked from Brisbane for service in New Guinea.

The battalion was based in 3 Mile Valley, near Port Moresby. Here they provided working parties and continued their jungle training before heading to Wau and onto Bulwa in late April. The battalion remained in this location for several months.

Over the ensuing months, 24 Battalion was involved in patrolling the Wampit Valley and defending the airfields of Bulwa and Zenag. The Battalion then went on to serve during the Markham River campaign before occupying Nadzab. In early 1944, 24 Battalion took part in the Ramu Valley campaign.

During the battalion’s time in the Ramu Valley, Knight and three other men were tasked with locating an American airman who had crashed near Boana. They located the body of Lieutenant Harry H Dunham, and brought it back for burial. Knight and his men were thanked in a personal letter from Lieutenant General George C Kenney, the commander of the Allied air forces in the South West Pacific Area.

In June 1944, Knight was accidentally injured, suffering several fractures to his face. He was evacuated to the US 23rd Field Hospital, before being taken further back to the Australian 111 Casualty Clearing Station. He spent nearly a month recuperating and rejoined his unit on 13 July.

After the 24th Battalion returned to Australia in early August, Knight spent the remainder of the year and nearly all of January 1945 battling malaria. He rejoined 24 Battalion in late February after undertaking a course in booby traps, mines and demolitions.

The battalion was sent to Bougainville and began operations along the Buin Road. Knight was made acting sergeant on 21 May and only days later, during operations near the Hongorai River; Knight cleared five major minefields single-handedly, with only his hands and a bayonet. For this he was awarded the George Medal.

His citation reads: ‘For outstanding personal bravery and devotion to duty in clearing occupied enemy territory of mines and booby traps.

During the vital Hongorai River operation in South Bougainville on 24 May 1945, Cpl Knight, acting Pioneer Sergeant, 24 Aust Inf Bn, displayed personal courage of the highest order when, after his platoon commander had been blown up alongside him, he continued the location and destruction of Japanese mines and booby traps single-handed.

When the Battalion captured vital enemy positions astride the BUIN Road, many casualties were caused and complete occupation delayed by cunningly laid enemy mines and booby traps which defied detection by our instruments.

With cool courage he completed the dangerous task singlehanded although he knew the slightest error in judgement would explode the mines. In all, he cleared five major minefields, thus making the area safe and permitting the occupation of the areas without further casualties.

During the whole of the operation Cpl Knight discharged his dangerous duties with complete disregard for his own personal safety, never faltering even when all the other members of the squad had become casualties. His devotion to duty in continuing the clearing singlehanded using only improvised tools enabled our forces to secure the area thus permitting further advances along the BUIN Road.’

Knight was promoted to sergeant in June and Mentioned in Despatches for his actions on Bougainville. After the end of the war, Knight returned to Australia in January 1946 and was invested with his George Medal on 10 January. He was hospitalised in February and had his appendix removed. Knight was discharged from the AIF on 2 July 1946.