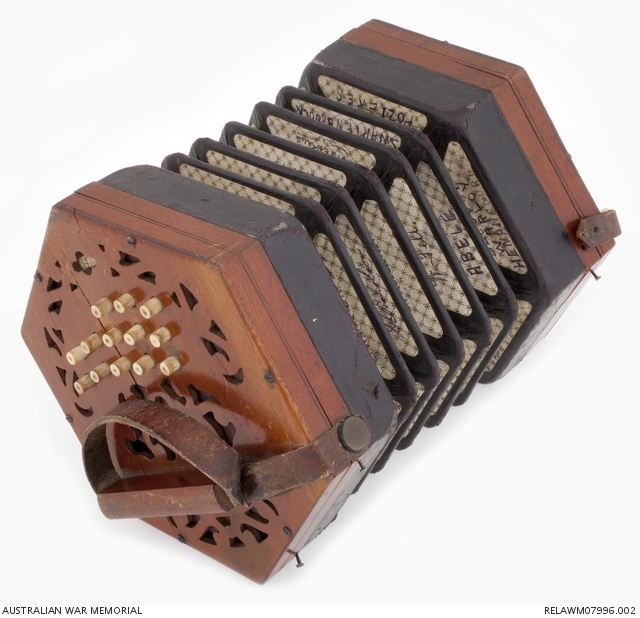 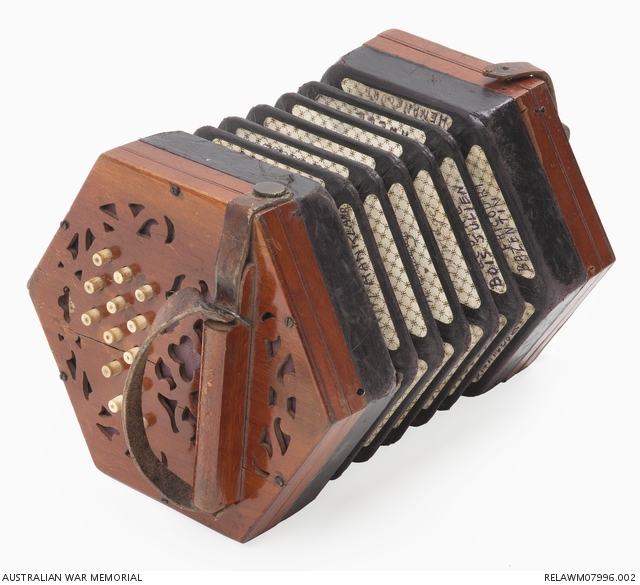 Hexagonal varnished mahogany wooden framed five fold carboard bellows concertina with pierced decoration to each side frame. There are thirteen shaped bone key buttons to each side in two lateral groups of five and one group of three, operating steel reeds contained within the instrument. A thumb button is mounted adjacent to the right side grouping. The upper note sounds when bellows are drawn out, while the lower note sounds when bellows are pushed in. The card bellows are clad and reinforced in black leather, and each face of the black leather bellows is decorated with a shaped piece of patterned paper, featuring a geometric star pattern in gold.

Each side is also fitted with a palm rail (one of which is impressed 'Steel Reeds'), and a leather retaining strap, screwed to the forward part of the palm rail, passing through a brass retaining buckle before being secured to the rear of the frame with a thick brass pin. An oval opening in the right side frame reveals a paper label which states: 'Lachenal & Co Patent Concertinas Manufacturer London'. A similar but smaller opening on the other frame reveals the serial number, also on a paper label: 84335.

Both wooden side frames are cracked with some impact damage evident to the left frame - two of the top three keys on the right frame are loose and appear to have become disconnected from their reeds. An internal inspection by the Memorial's conservators revealed that a number of the reed pads had become detached and a repair had been attempted by Chudleigh with red sealing wax.

The owner has notated in ink on each of the 72 papered panels on the bellows, places he has served and the men he served with. They are (grouped by the six bellows sections, and allowing for fading handwriting):

The second of two Anglo model concertinas played by 59 Sergeant Herbert John Chudleigh, 1 Australian Field Ambulance (1 AFA), AIF. Chudleigh of Liverpool Rd, Ashfield, NSW, was 22 years old when he enlisted at Sydney on 24 August 1914, and noted his occupation as 'storekeeper'. However, his Service Record contains a letter from his pre-war employer, noting him as an accountant with the New South Wales Government Railways & Tramways Chief Accountant's Office. After initial training, Chudleigh embarked for overseas service aboard the transport HMAT Euripides on 20 October 1914, travelling with the first Contingent Convoy to Alexandria via Colombo and the Suez Canal. After further training at Mena Camp and Lemnos Island, Private Chudleigh landed at Anzac Cove within the first 48 hours of the start of the Gallipoli campaign.

On 27 June, a contingent of 1 AFA men, including Chudleigh, were transported by boat to Cape Helles to assist No 11 British Clearing Station. The ongoing and ultimately fruitless assaults by British, French and Indian troops (supported earlier in May by Anzac troops) on Achi Baba and Krithia in the south of the peninsula were generating large casualties and 1 AFA provided support until they rejoined their unit on 15 July. After the Gallipoli evacuation 1 AFA was moved to France via Marseilles aboard the transport Simla. As casualties rose amongst his unit, Chudleigh was promoted to Lance Corporal on 16 June 1916, to Corporal on 5 August 1916 and to Lance Sergeant on 30 November. By May 1917, Chudleigh was a sergeant (Nursing Duties).

From 11 to 15 August 1917 he was detached to support 2 Australian Casualty Clearing Station and the following day, he left for 10 days leave in Paris. He spent most of December 1917 on furlough in England and soon after his return was detached, on 14 January 1918 to 2 Australian Casualty Clearing Station for almost 3 weeks. As a 1914 enlistee, Sergeant Chudleigh was granted early leave and embarked for return to Australia from Taranto, Italy on 8 October 1918 aboard the transport Port Darwin. He disembarked at Sydney on 26 December and was discharged from service on 24 February 1919.

This concertina was one of two used by Sergeant Chudleigh on active service. The first, he related in his letter of offer to the Australian War Memorial of 1924, 'I took away with me to the war and carried with me until August 1916'. At Mena Camp in Egypt prior to the Gallipoli landings, 'I used to play it, at the head of the column on the march, also, I played it at several church parades (where at times we had no other music) and also at various concerts etc in Egypt and France. I also took it with me at Anzac, where we managed to knock out some fun in the dug outs, during an impromptu concert or sing-song. It accompanied me also to Cape Helles when a section of my unit were sent there and once I thought I had lost it [while there] when our dug out was blown up by a shell. Fortunately I managed to dig it out, all covered with dirt, but still able to get a tune out of it.

'When we went to France, I still carried the old concertina until about August 1916 when I decided to pension the old instrument off and I sent it back home. I had it autographed by the officers and men of the unit, and also marked the names of the different places where I carried [it].

'The boys of the unit were so used to the old instrument that they made a collection and gave me the money to buy a new concertina, which I had sent from London and which I carried with me and used to good purpose till I left the unit.'

This second concertina was an upgrade for Chudleigh, sporting an extra six keys and costing £3 13, as opposed to his first example, which retailed for a pound less. Both concertinas (see RELAWM07996.001 for the first) were first displayed in August 1925 in the Australian Medical Corps section of the Memorial's temporary museum at the Royal Exhibition Buildings, Melbourne.