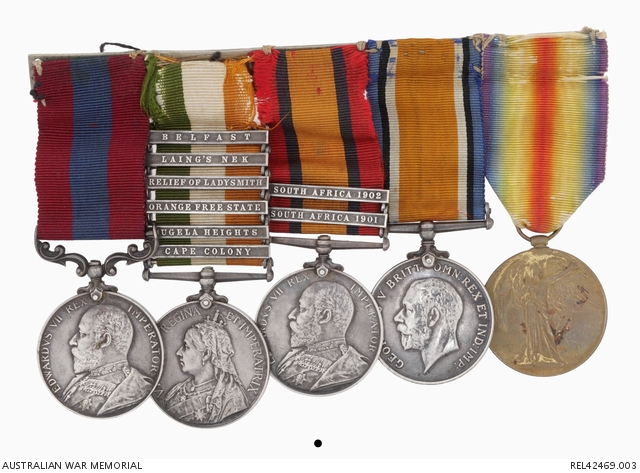 Related to the service of Robert ‘Bob’ Cornelius Gifford, born 1872 at ‘Big Bombay’, Braidwood to Joseph and Pauline Gifford, Scottish immigrants who were employed as farmhands on the property of ‘Manar’ from about 1848/49. A platelayer by trade, Gifford had left his home of Reidsdale, midway between Araluen and Braidwood, for work in northern NSW when news of the outbreak of hostilities between the Boers and British in South Africa reached Australia. The Australian colonies responded to Britain’s request for assistance almost immediately, with Queensland offering troops in July, closely followed by New South Wales and Victoria. Each of the colonies ultimately sent between four and six contingents, with the first groups arriving in South Africa between November 1899 and March 1900.

In October 1899 Gifford was working as a shearer in Quirindi, NSW. The Sydney Morning Herald (SMH) reported on 11 October that ‘two men named Bevan and Gifford left Quirindi by train en route for Natal to enlist in the English Army or Natal police or mounted rifles to fight against the Boers. They have been employed at Knickerbell station and have thrown up their positions to fight for the British. On leaving the shearers cheered them heartily. About 20 mounted shearers formed a guard of honour and escorted them to Pine Ridge, on Mr Dangar’s Mooki station, where great enthusiasm was displayed at the final leave taking... Both are good horsemen. [Gifford] spent several years in the New South Wales Permanent Artillery. They have letters to influential officers in the British Army.’ The same newspaper reported on 12 March 1900 that both men departed aboard the Aberdeen Line steamer SS ‘Salamis’, which had just completed its maiden voyage from London via Cape Town to Sydney and left Sydney on its return voyage at 3:00 pm on 13 October 1899 for Natal, Cape Town and London. Gifford and Bevan were accompanied, according to the SMH, by Captain Massey of the British South African Company. These two Australians later claimed to be the first to volunteer, embarking for South Africa two weeks before the first official contingents (NSW and Victoria) sailed on 29 October.

Bob Gifford and Bevan joined the South African Light Horse (Natal) on 10 November 1899 as privates, the same day the unit was formed under the command of Major the Honourable Julian Byng, previously of the 10th Hussars. Gifford was assigned service number 734 and Bevan 755. By the end of January 1900 Gifford had fought at the Battle of Colenso at Tugela River, Natal on 15 December 1899, and nearby Skion Kop on 23 - 24 January 1900, both regarded as significant British defeats, but equally where the SALH distinguished itself.

In a letter to his brother Fred on 7 February Bob Gifford related ‘I am alive and well. No doubt you have read a full account of the great battle that was fought at Colenso on the River Tugela. Our loss was terrible. It was something like 1,150 men killed, wounded or taken prisoner. I was under a cross and forward withering fire for seven hours, and saw many of my comrades fall. The South African Light Horse ... lost heavily. Out of 187 men we lost 46 killed, wounded and prisoners. W. Bevan was either killed or taken prisoner.... A small party of us were out patrolling the other day and we fell into an ambush with the result that our captain was mortally wounded. [This is likely Captain de Rougemont who was reported as killed on 23rd January] I have been fired at several times but always had the good fortune to escape unhurt. Both Bevan and I joined as troopers ... we were, as you are aware, the two first to volunteer from the Australian colonies. ...I have been in several engagements – the last of any importance was the seizing of Spion Kop. For services rendered in action I have been made a corporal.’

Corporal Bevan had indeed been taken prisoner – in a letter to the SMH on 14 August 1900 he advised that his squadron was fighting on the right flank during the Colenso action (‘a warm time we got of it – the bullets simply rained’), when his captain refused to retire despite the general order to do so. ‘We held out until half past 3 in the afternoon when we were surrounded and had to give in. There were 11 men and two officers’. He and 140 other prisoners were sent to Waterval POW camp; but on 27 April he and ‘one of the Australian Horse’ escaped and made their way ‘north of Mafeking’ for eight or nine days. Both men had developed fever and were dangerously low on water when they encountered a British armoured train which rescued them. After a spell in hospital, Bevan rejoined the SALH.

Corporal Gifford wrote home again on 27 March from Assembly Hospital at Pietermaritzburg, about the actions leading up to the Relief of Ladysmith. ‘After being so fortunate at Colenso, Potgieter’s Drift and Skion Kop, I had the ill-luck of being severely wounded at Pieter’s Station (also known as Cingolo) in February last. Early in the morning of February 14 our regiment... were sent out in advance to find the position of the enemy. We discovered them near Tzar Hill and the zip and ping of the Mauser bullet and the buzz of the Boer shells told us they meant business. But we were all well prepared. The naval guns were soon in action and in a short time the clouds of smoke and dust caused by the bursting of the shells gave evidence that the battle was becoming general. The Boers replied with shrapnel but it burst harmlessly over our heads.’

Gifford then described the sight of the British infantry advancing on the Boer trenches. ‘The command rang out to ‘advance’ and the thin khaki line pressed slowly forward. Eventually they reached the trenches and found the Boers had evacuated them. The effects of the well-directed shells had caused the trenches to be untenable.

‘Night came on and put an end for the time being to hostilities. Sometime in the night we were suddenly roused from our sleep and in a short space of time we were mounted and riding over the open veldt. Morning had scarcely dawned and we found ourselves in the enemy’s right flank. Taken completely by surprise, they opened fire, whereupon we dismounted and after taking our horses to cover, we advanced and towards the enemy under a hail of bullets. So thick did the lead fall around us that no mind could really think that a living person could reach the top of the kopje. The infantry by this time were preparing to storm the kopje and on receiving the order ‘Fix bayonets – charge’ the gallant Devons, with exultant shouts, succeeded in carrying the position [This is likely Hussar Hill].

The cavalry were then let loose as it were, and out regiment mounted their horses to partake in the rout. But the glory of the day for me had ended, for I had just taken my seat in the saddle when a volley from a neighbouring kopje brought me and my horse to the ground. My horse was shot though the neck, while a Mauser, glancing from my spur, tore its way through my left foot and embedded itself in a horse near by. Severely hurt by my horse falling on me and with my wounded foot, I suffered the most excruciating agony. The next day had far advanced before I was picked up by the stretcher bearers and sinking from the loss of blood, I was quite faint when placed in the train for Pietermaritzburg, arriving there after a weary journey. Seven weeks elapsed before I got strong again. I will be proceeding to the front to rejoin the SALH early in April.’ Gifford failed to mention, if he knew, that he had been mentioned in General Buller’s dispatches for this action.

In the meantime, the SALH under Byng had been involved in the final relief of Ladysmith and a period of service in Cape Colony. In early May the Natal Field Force (of which the SALH was a part) was tasked with clearing Natal of Boer forces towards Newcastle – a task involving ‘ceaseless pursuit’ and sharp encounters. Gifford rejoined the unit in early May when they had been tasked with clearing and taking Laing’s Nek through to Alleman’s Nek. June and July were spent on garrison duty at posts on the Pretoria-Natal railway line. On 7 August the Force were mobile again, advancing from the railway to meet Lord Roberts’ force at Belfast, assisting in defeating a Boer force at Bergendal on 27 August and occupying Lydenburg a few days later. A final action on 28 September saw the SALH seize Pilgrim’s Hill.

After inspection of the SALH by Lord Roberts at Pretoria in 15 October, Gifford was discharged on the same day. A month later, he volunteered with the South African Constabulary (SAC), signing on for two years and eighty days. His service was noted in Lord Roberts’ final despatch in the February 8, 1901 edition of The London Gazette among those SALH ‘officers & men who, during 12 months work, have performed special acts of bravery or have been selected for and successfully carried out arduous reconnaissance or dangerous duties.’

Little is known of Gifford’s service with the SAC except to note that he attested at Bloemfontein on 16 November 1900 and served with the rank of Troop Sergeant Major. However, The Queanbeyan Age of 21 January 1903 reported ‘It will interest many of our readers (says the Braidwood Express) to learn that Sergeant Major “Bob” Gifford, formerly of Bombay in this district is now in charge of an outpost about 90 miles from Bloemfontein. A week or two ago he was married to Miss Rose Pike, of Araluen, who had voyaged across to South Africa to be united to her future husband.’ The members of his troop presented him with an Elgin gold pocket watch to celebrate his marriage. Shortly after, on 2 February, Gifford obtained his discharge from the SAC, and it is noted on his discharge papers that he was the recipient of the Distinguished Conduct Medal (DCM), but the note has been partially effaced. Although Gifford’s name is listed in the London Gazette of 8 February 1901 as having performed outstanding service with the SALH, the published list was considered at the time to be a means of recognising men who were not entitled to receive imperial awards, and there is no evidence that he was ever awarded a DCM.

The Giffords remained in the Bloemfontein region and later Cape Town and had four children (Violet, Ethel, Stanley and Robert George). Rose was pregnant with Robert junior when she returned to Braidwood in September 1909. Robert remained in South Africa. On 20 April 1916, aged 44, Gifford enlisted as a private with 5 Battalion, South African Infantry at Johannesburg for active service in German East Africa. He was declared unfit for service on 1 May 1917, whereupon he returned to his family in Braidwood, meeting his youngest son for the first time. Gifford died on 26 May 1940 at Kensington, NSW, aged 67; Rose died on 20 July 1952 aged 76.