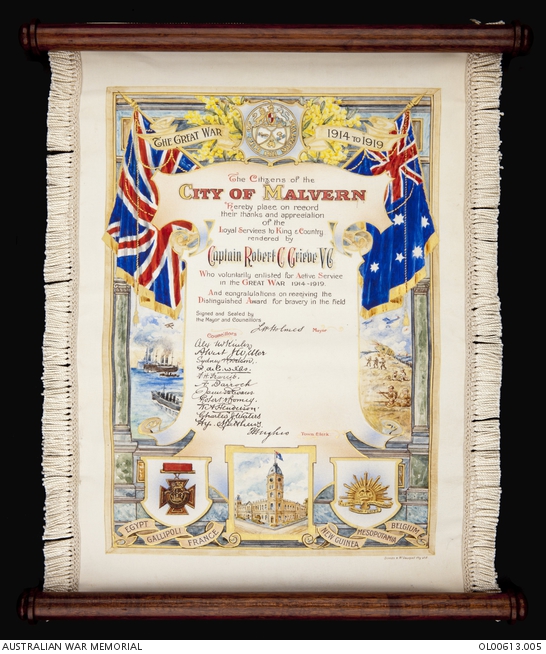 Silk backed hand illuminated vellum presentation scroll with upper and lower wooden scroll bars. The front of the scroll has a stylised scroll across the top over sprigs of wattle with 'THE GREAT WAR' '1914 TO 1919' separated by the Malvern City coat of arms. On the left side is a full colour Union Jack, on the other is a full colour Australian flag. Directly below the Union Jack is an image of Naval ships. Below the Australia flag is an image of infantry soldiers with a tank and planes in attacking an unseen enemy. Near the bottom of the scroll are three images (left to right) A Victoria Cross above the scrolled locations 'EGYPT' 'GALLIPOLI' 'FRANCE'; Malvern City Council building; Rising Sun Badge above the scrolled locations 'NEW GUINEA' 'MESOPOTAMIA' 'BELGIUM. Central to the scroll is the following address:

The citizens of the CITY OF MALVERN hereby place on record their thanks and appreciation of the Loyal Services to King & Country rendered by CAPTAIN ROBERT CUTHBERT GRIEVE VC Who voluntarily enlisted for Active Service in the GREAT WAR 1914-1919. And congralulations [sic] on receiving the Distinguished Award for bravery in the field.

The address is signed by the mayor, 11 councillors and the town clerk.

Grieve was born to John and Annie Deas (nee Brown) Grieve at Brighton, Victoria on 19 June 1889. Following his education at Caulfield Grammar School and Wesley College, he became a commercial traveller with soft-goods merchants Connibere, Grieve & Connibere. John Grieve was a partner in the firm until his death in 1899.

With about nine months experience in the Victorian Rangers militia, Robert Grieve enlisted in the AIF on 16 June 1915 and was posted to 'A' company of the newly formed 37 Battalion. By the time the battalion embarked from Sydney twelve months later, Grieve had reached the rank of lieutenant. Shortly after arriving in England on 25 June 1916 he was seconded to 10 Light Trench Mortar Battery and remained with the unit when it moved to France in November. Reverting back to 37 Battalion near Armentieres on 15 February 1917, he was given command of 'A' company with the rank of temporary captain. The rank was confirmed on 19 April.

The unit had been mainly involved in minor skirmishes until the battalion's first major battle at Messines between 7 and 9 June. During the battle Grieve's company was halted by machine gun fire from a concrete pill-box while attempting to pass through a gap in the wire in front of the enemy trench, which resulted in casualties to over half his company and all his fellow officers. Fearing the complete annihilation of his company, Grieve moved forward alone throwing bombs (grenades) as he went. Able to get close to the firing slits in the pill-box under cover of the dust thrown up by his bombs, Grieve threw more bombs through the firing slits, killing all the German occupants.

Successful in silencing the machine guns, Grieve then stood and signalled his men forward who quickly overwhelmed the German trench. While still standing on the parapet, Grieve was severely wounded in the shoulder by an enemy sniper but by this time the objective had been taken. For his actions during the Battle of Messines, Grieve was awarded the Victoria Cross.

Grieve had only returned to his battalion for a few weeks following his convalescence when he contracted a serious illness that ended his active service. He was invalided home to Australia in April 1918 and, in Sydney on 7 August, married Sister May Isobel Bowman of the Australian Army Nursing Service who had cared for him when the illness necessitated his transfer to London. Grieve's appointment with the AIF was terminated on 28 June 1918. A war memorial scholarship in his name was established by members of the Old Wesley Collegians' Association at his old school in 1919.

After leaving the army Grieve founded another soft-goods firm in Melbourne, Grieve, Gardner and Co., and served as its managing director until his death from cardiac failure on 4 October 1957. He was buried with full military honours at Springvale Cemetery.