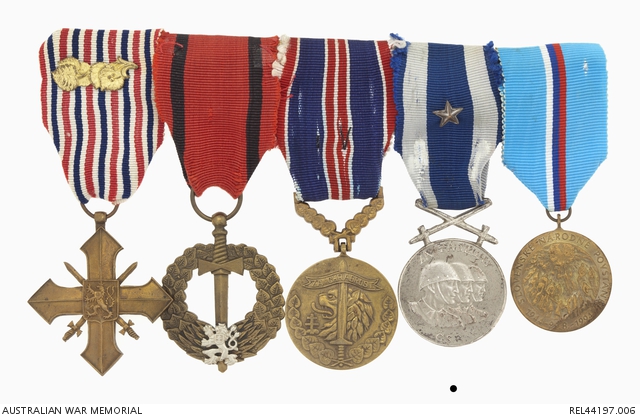 Czechoslovakian Military Medal for Merit, 1st grade. The obverse has three soldiers' heads in helmets underneath raised lettering 'ZA ZASLUHY' [For merit]. 'CSR' in raised lettering at bottom. Reverse has a linden spray over a stylised sun. The suspender is formed by two crossed swords. A small star is attached to centre of ribbon. Ribbon is royal blue with 9mm white stripes set 1mm from edge. Unnamed as issued.

Medal awarded to Frank Kocyan who was born on 14 October 1923 at Cesky Tesin, Czechoslovakia, where his parents had a farm. Kocyan was educated here then worked on the family farm until the occupation of Czechoslovakia by the Germans in 1939. Sent to Germany as a forced labourer, he escaped back home but was rearrested and sent to the German Eastern Front as a labourer digging trenches. Kocyan succeeded in crossing to the Russian lines and was taken to the Training Centre in Buzuluk before being transferred to the Czechoslovak forces in exile. After 8 months of training with the 2nd Czechoslovak Parachute Battalion under the command of General Prikryl (recently arrived from England) they fought their first battle against German forces at Dukla, on the border with Poland, in September 1944, suffering significant losses.
Pulled from the fighting, the Battalion was parachuted behind enemy lines near Banska Bystrica in Slovakia to participate in the National Revolt. The Germans invaded and crushed the Revolt, capturing thousands of fighters. However many rebels and survivors of the battalion retreated to the mountains where they endured hunger, extreme cold and shortage of arms and ammunition in the winter of 1944-45. Kocyan’s battalion were still in action when the German Army retreated before the advancing Soviets in 1945.
In 1950 he migrated to Australia where he met Jozefa, whom he married in 1953.