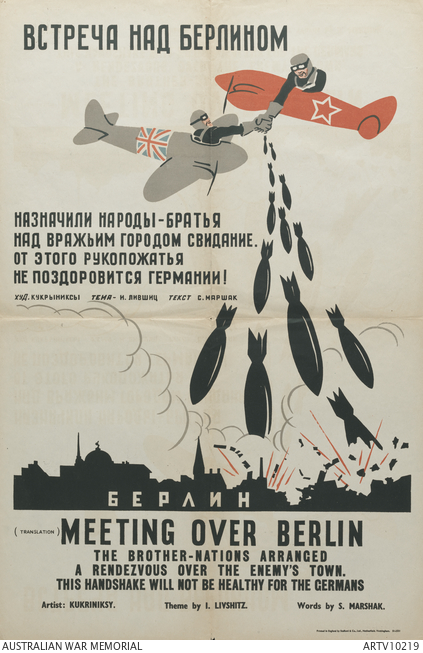 British Second World War propaganda poster issued as part of a campaign by the Government to incite anti - Nazi sentiment in 1941. This poster illustrates the significance of a British Soviet air power alliance against the Germans with a cartoon of British and Soviet planes passing each over mid-air, the pilots leaning out to shake hands. From the point their hands meet bombs drop onto a silhouette of Berlin. The translation in the lower third states ' ...This handshake will not be healthy for the Germans.'

Printed by Stafford & Co the images used for this campaign were reproductions of Russian designs purported to have been presented by Joseph Stalin to Lord Beaverbrook, then Minister of Supply, when he headed a delegation to Moscow in 1941. Sir William Maxwell Aitken (1879 - 1964) later Lord Beaverbrook (1917) was the first senior British Politician to meet with Stalin after Hitler's invasion of Europe. On his return he set out to convince Churchill to launch a second front in Europe to draw Germany away from the Eastern front and assist the Russians by supplying them with more arms. During the First World War Lord Beaverbrook was Minister for Information (from 1918) and enthusiastically co-ordinated British Propaganda production. He commissioned well known artists and writers to design and create some of the most successful campaigns of that period. This campaign launched on his return to Britain in 1941 has many similarities with his earlier campaigns this time using Russian artist and writers. In this case the artist of the original design is acknowledged as Kukryniksi the theme devised by I. Livshitz and the words by S. Marshak.