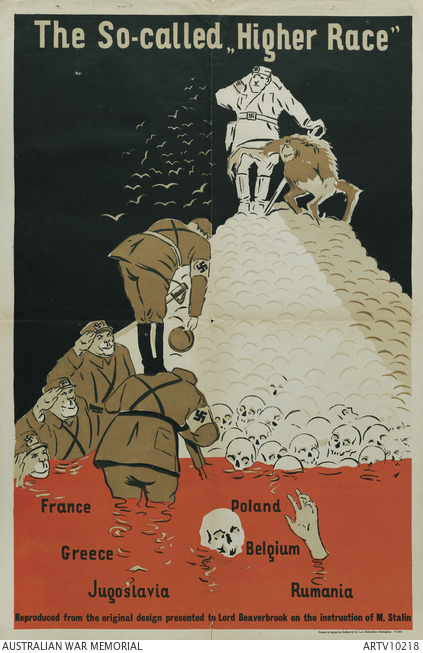 British Second World War propaganda poster issued as part of a campaign by the Government to incite anti - Nazi sentiment in 1941. This poster features a macabre caricature of Adolf Hitler standing on the shoulders of his fellow Nazi officers in a pond of blood. He is bowing and paying homage to a chimpanzee standing on a pyramid of human skulls. The names of the invaded nations are inscribed in the pond of blood. Crows or bats fly centre left. Stylistically the image is a continuation of the demonisation of the German race and its leaders via a visual strategy of racial stereotyping employed during the First World War.

Printed by Stafford & Co the images used for this campaign were reproductions of Russian designs purported to have been presented by Joseph Stalin to Lord Beaverbrook, then Minister of Supply, when he headed a delegation to Moscow in 1941. Sir William Maxwell Aitken (1879 - 1964) later Lord Beaverbrook (1917) was the first senior British Politican to meet with Stalin after Hitler's invasion of Europe. On his return he set out to convince Churchill to launch a second front in Europe to draw Germany away from the Eastern front and assist the Russians by supplying them with more arms. During the First World War Lord Beaverbrook was Minister for Information (from 1918) and enthusiastically co-ordinated British Propaganda production. He commissioned well known artists and writers to design and create some of the most successful campaigns of that period. This campaign launched on his return to Britain in 1941 has similarities with his earlier campaigns this time using Russian artist and writers.