The return of the Soudan contingent. Scene in Oxford Street 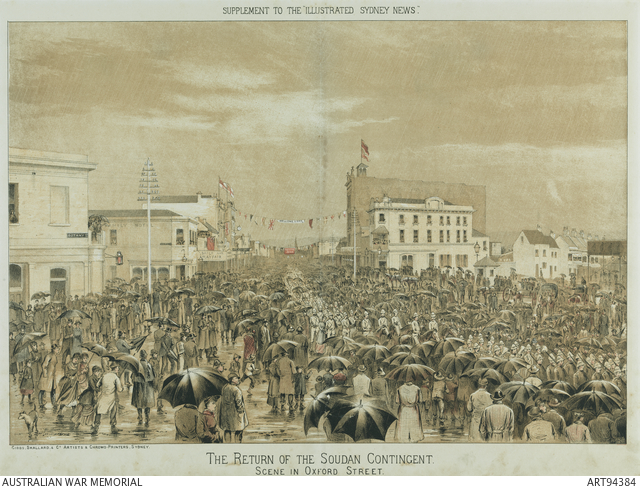 Commissioned by the 'Illustrated Sydney News' as a special colour supplement to mark the return of the NSW Contingent from the Sudan on 23 June 1885. It was published in Saturday 4 July 1885 issue and promoted as a companion picture to the coloured print which commemorated the dispatch of the NSW Contingent '. The two together will form memorial pictures and a lasting record of the beginning and end of the most memorable event that has ever yet taken place within the brief history of Australia since its settlement, now nearly one hundred years ago.' The scene is of Oxford Street, looking west. Hundreds of people turned out to welcome the troops home despite the cold, wet weather. The troops were reportedly still wearing their light cotton Khaki uniforms and got completely drenched marching along Circular Quay, up to Pitt Street, by Hunter, George, Park, College, and Oxford Streets. A planned review at Moore Park was cancelled and instead the men were marched directly to Victoria Barracks, Paddington. It was reported in the Illustrated Sydney News that ' ...the scene in Oxford Street was a remarkable one. The tram traffic was stopped for an hour or two. The troops in column of four marched in the middle of the street. The footways and a considerable portion of the roadway was densely thronged, and every window, balcony, or any other coign of vantage that could be availed of was fully occupied by enthusiastic observers..' The artist captured the event from the balcony of Mr Clarke's Grocery shop, at the intersection of Botany and Oxford Streets.