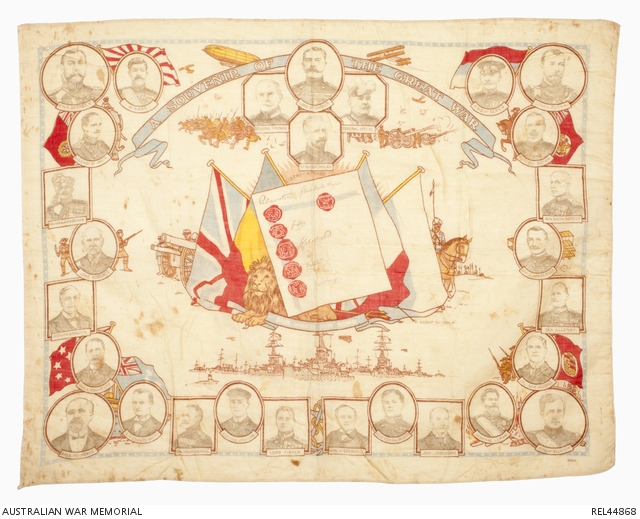 Printed cotton patriotic cloth. The cloth is surrounded by a pale blue border and headed by the words 'A SOUVENIR OF THE GREAT WAR'. To the left of this heading is an airship, to the right is a biplane. In the centre of the heading is a portrait of Lord Kitchener. On either side and slightly lower are portraits of General French and General Joffre. Below Lord Kitchener is a portrait of Grand Duke Nicholas. A calvary charge is depicted to the left of these portraits while to the right an artillery attack is printed.

In each corner are larger portraits of King George V, the Czar of Russia, the King of Belgium, with a burning town behind him, and President Poincare. Printed clockwise around the cloth are portraits of the King of Servia [Serbia] with a flag behind him, General Botha with a mounted soldier and red ensign on either side, General Smith Dorrien, General D Henderson with an aeroplane behind it, General Allenby, Colonel Sam Hughes with two infantry soldiers and a red ensign on either side, General Leman, Lord Landsdown, Rear Admiral Beatty, Hon. W Churchill and Lord Fisher with an anchor between them, Admiral Jellicoe, General Douglas Haig, Sir Edward Grey and Hon. A Bonar Law with a ship and the flags of Australia and New Zealand behind them, Hon. H H Asquith, Lord Roberts with two soldiers on either side, Maharajah of Behar, Viceroy of India with a red ensign and an elephant on either side and Mikado in front of a Japanese flag.

In the centre of the cloth is a piece of paper with signatures and red seals printed in front of the flags of the United Kingdom, Belgium, France and possibly Imperial Russia. Behind the flags is a sun with the words 'LIBERTY & PEACE' written near the top. At the base of the paper is a lion and a scroll with the words 'OUR WORD IS OUR BOND'. To the left of the flags are French soldiers manning a field gun. To the right is a mounted Indian soldier. Below the centre image is depicted a fleet of warships with aeroplanes flying above them.

This printed souvenir was sent by Private Edward Fuller to his wife, Agatha Mabel Fuller, while he was recovering in London from wounds received at Pozieres in July 1916.

Edward 'Ted' Fuller was born at Warren, NSW in 1885. He married in 1913 and in that year was recorded on the electoral roll as living as 'The Overflow' near Mitchell, Queensland, employed with pastoral duties. He was living at Tambo, working as a stock and station agent, when he enlisted in the AIF at Brisbane on 23 June 1915.

After initial training Fuller was assigned to the 6th Reinforcements to the 25th Battalion, with the service number 2666. The unit left Brisbane for Egypt aboard HMAT A48 Seang Bee on 21 October. Fuller transferred to 3 Platoon, A Company, 9 Battalion at Zeitoun on 4 March 1916. As there was already another man with that service number in the battalion, his service number was amended to 2666A. Three weeks later the battalion moved to France for service on the Western Front.

Fuller was severely wounded during the battalion's first action, at Pozieres, on 23 July, where he received shrapnel wounds to his throat, trachea, and left shoulder. He was evacuated to England on the Hospital Ship Dieppe and transferred to the London War Hospital at Epsom. At the end of September, his wounds had healed sufficiently to allow him to take some leave, although his voice was still hoarse. After training at Perham Downs with the 3rd Training Battalion, Fuller returned to France where he rejoined his battalion on 3 January 1917.

At the end of July Fuller was hospitalised for three weeks, suffering from Trench Fever. He returned to his battalion on 24 August, in time to take part in the Third Battle of Ypres. On 2 October 1917 Fuller, acting as a despatch runner, was killed by concussion from a shell burst on ANZAC (Broodseinde) Ridge. His burial place was lost by the end of the war and his name is commemorated on the Menin Gate Memorial at Ypres.