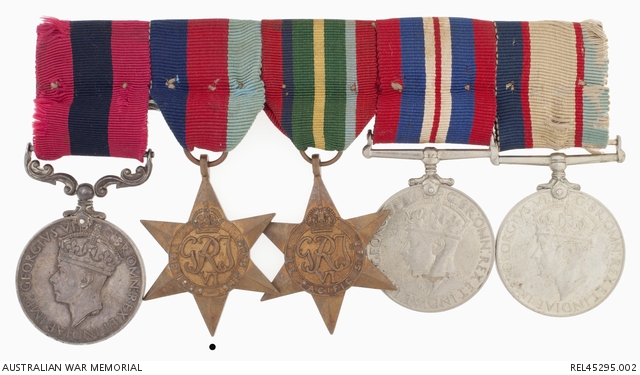 This 1939-1945 Star relates to the service of Charles Terence 'Terry' Parker QX11509. Parker was born in Atherton, Queensland, on 5 May 1920. He enlisted in Townsville as a Private with the Queensland raised 2/26th Battalion on 22 January 1941. After six months of training at Redbank Camp QLD and in Bathurst NSW the 2/26th Battalion arrived in Singapore on 15 August. Deploying to Malaya in October, the battalion undertook further training and the preparation of defences. In January 1942 the unit moved to Johore, the southernmost state of peninsular Malaya and was located at Ayer Hitam on 29 January when a heavy Japanese attack was launched against it. Parker was awarded the Distinguished Conduct Medal for his actions during the fierce fighting, which inflicted heavy Japanese casualties. The following day the 2/26th Battalion crossed over into Singapore initially defending the critical crossing point into Singapore at the Causeway. After the massive Japanese amphibious attack on the night of 8/9 February the Battalion was forced to move to west to protect the flanks of the defence and for the next week fought a series of heavy actions in Singapore including at the key point of Bukit Timah (Tin Hill in Malay) against sustained Japanese attacks. However, on 15 February Singapore was surrendered and Parker became a prisoner of war for the next three and a half years. Parker survived captivity, including time on the infamous Burma-Thai death railway at Shimo Sonkurai/Sonkurai as part of F Force. After the completion of the railway he was returned to Singapore and was recovered from the Japanese at Changi POW camp on 5 September 1945. He was repatriated to Australia on 10 October on board the ‘Largs Bay’ and was discharged on 21 December 1945.