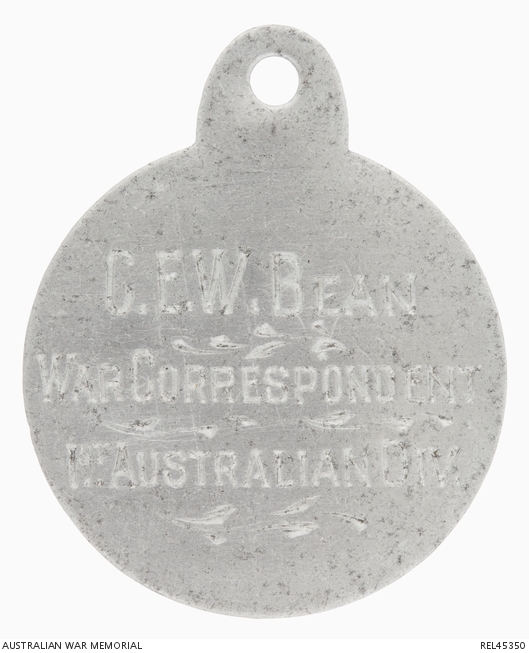 Circular aluminium tag with integral suspension loop at top. Hand engraved on one side is the following: 'C.E.W.BEAN / WAR CORRESPONDENT / 1ST AUSTRALIAN DIV.' Each line of words is separated by a floral spray. The other side is blank.

Unofficial private identity tag made from aluminium for Charles Edwin Woodrow Bean. Born 18 November 1879 at Bathurst, he was a free-lance journalist who was elected by the Australian Journalists' Association for official war correspondent to accompany the Australian Forces overseas in 1914. Bean sailed with the First Contingent to Egypt and witnessed the training undertaken there. He was commissioned as an honorary captain and dressed himself appropriately in the uniform of the AIF. Presumably he had this tag made around the same time; the opportunity for witnessing action implied the potential for being shot or killed, and Bean would have been as concerned as any other man that he be correctly identified.

When the First Australian Division landed at Gallipoli on 25 August 1915, Bean followed just over five hours later. He remained close to danger throughout the campaign until the evacuation; in the costly and abortive attack on Cape Helles on 8 May, he not only accompanied the men attacking, but assisted the wounded; and it was only his status as a civilian that made him ineligible for the Military Cross for which he was resultantly recommended. He was, however, Mentioned in Despatches. Bean was shot in the leg on 6 August but refused evacuation, preferring to be treated daily in his tent and remain on the peninsula - he was loath to miss anything. He was kept up to date during the next few days about the situation at the front while he was laid up with his wound but soon after returned to the front line, including the trenches at Lone Pine. By the end of the campaign, Bean's reputation as a brave man and a fair journalist was permanently established.