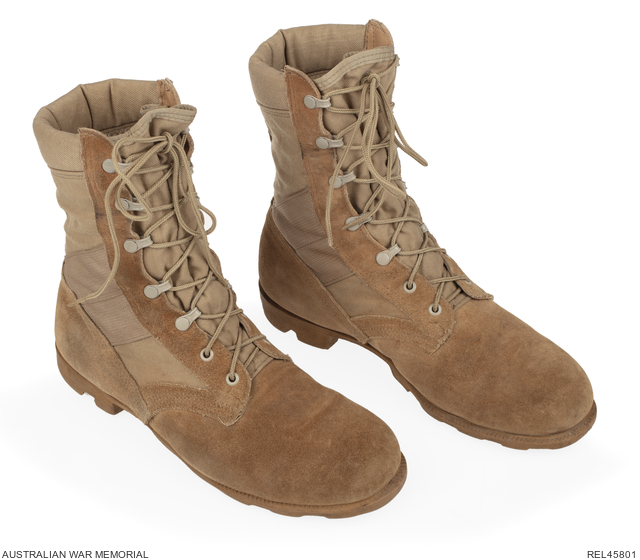 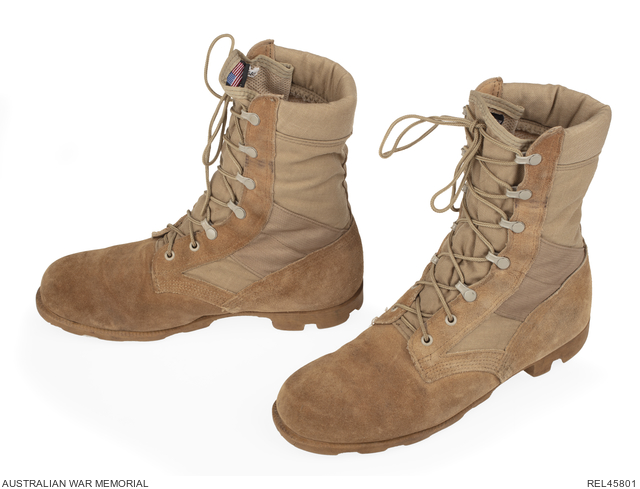 Pair of worn tan coloured size 10 wide Altama brand 'Mil Spec' (military specifications) model 4156 combat boots. The 'panama' style sole is made from a vulcanised tan rubber, with the lower part of each boot made from synthetic suede. On the inside of each boot tongue is a black nylon manufacturers tag featuring a small full colour USA flag and the word 'ALTAMA' underneath in white. Each boot has tan nylon laces threaded through round metal eyelets and 'speed hooks'. Printed in black ink under these is a boot model and or/ batch number of '4156 10W 5280019'. The inside of each boot has a black removable innersole made from cushioned polyurethane. Impressed into the arch of each boot is '10W' and a circular logo featuring the words 'RO/SEARCH'. Both boot soles and heels show wear, with remnant pieces of mud on both.

This pair of boots was worn by Sergeant Peter Brinkworth in East Timor while serving with the Sniper Reconnaissance Platoon, Support Company 5/7RAR between September 1999 and mid-2000.

Peter attended Eaglevale High School, Campbelltown before leaving to join the Australian Regular Army in 1989. Like his father, Stephen Paul Brinkworth, who had served in South Vietnam with 7RAR, Peter became an infantryman in the Royal Australian Regiment serving initially in C Company of 5/7RAR (Mechanized), based at Holsworthy in Sydney. With this unit he deployed to Malaysia and Singapore twice on Rifle Company Butterworth rotations. In 1994 he became part of the Anti-Armour Platoon of Support Company 5/7RAR.

During 1996 he was promoted to Lance Corporal and was posted to the Reconnaissance Platoon of 5/7RAR. The following year he qualified for and joined the Sniper Platoon and served with them at the rank of corporal then sergeant where his roles included being No1 team leader and sgt supervisor.

After his return from East Timor Brinkworth transferred to the School of Infantry at Singleton NSW as sniper instructor before once again returning to the RAR, this time with the newly re-formed 4RAR (Commando). Whilst there he helped re-raise the 'green role' sniper capability before being posted in a variety of roles as a Regular Army cadre staff to the 4/3rd Battalion Royal New South Wales Regiment (4/3 RNSWR) at the rank of warrant officer class 2 from 2004 to 2008. Whilst in this unit he was on exchange to the US Marine Corps as a sniper instructor at 29 Palms base in California. Upon his return Brinkworth returned to an instructional role at the Infantry Centre at Singleton in 2009.

Brinkworth deployed to Afghanistan on Operation Slipper attached to 8/9RAR between September 2011 and July 2012 with Mentoring Team Three. In late 2012 he again went on an exchange program with the Marine Air Ground Task Force Training Command at 29 Palms, California.