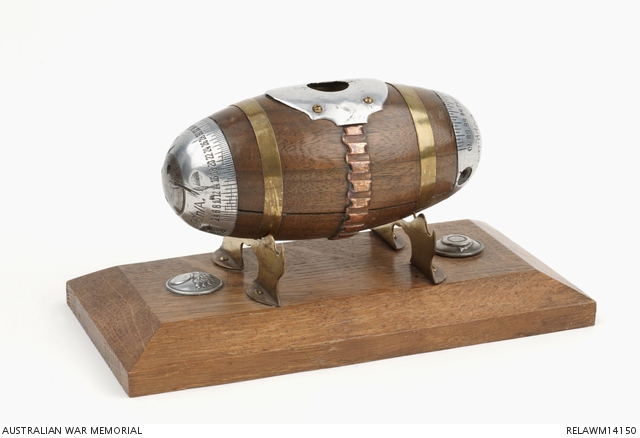 Trench art inkstand set on a rectangular oak wood base. The inkwell, made from part of a wooden aircraft propellor, rests on two brass feet cut from an 18 pounder shell case. Each foot has two small brass pegs that fit into brass bands bound around the inkwell, allowing it to slot securely onto the feet and base. Each end of the inkwell bears a steel anti-aircraft shell fuze. A brass ink container, made from a flare cartridge, is set into the centre of propellor section and has a protective steel plate around the edge held in place with four brass screws. A length of copper driving band reaches from each end of the steel plate around the propellor. The original brass inkwell lid is missing. The brass feet have curved slots to take two pens. One pen remains - the handle is made of the same oak as the base and has a copper tip to hold a nib. Both the base and pen handle have been darkened with boot polish. The base is decorated with two French uniform buttons in steel. One bears a bugle device and the other an exploding grenade.

This inkstand is part of a collection of trench art made by 6756 Sapper Stanley Keith Pearl, a Tasmanian who served with 5 Field Company Engineers, AIF. He enlisted for service on 9 November 1915 and returned to Australia on 21 March 1919. Pearl subsequently moved to Canberra and was employed as a carpenter by the Australian War Memorial. He supplied the following information about the stand, 'Completed on the Somme in February 1917. The base and pen handles are of oak and were cut from a table in a German dugout in Contalmaison and polished with boot polish. The bowl is from a propellor of a Vickers biplane wrecked at Le Sars. The ends are German anti-aircraft shell fuzes, one from Martinpuich, the other from Bazentin-le-Grand. The brass bands, standards and lid were souvenired from an 18-pounder battery near "Needle Dump", and the French buttons on the base were exchanged for cigarettes in Albert. The ink container is a flare cartridge from Eaucourt-l'Abbaye.'