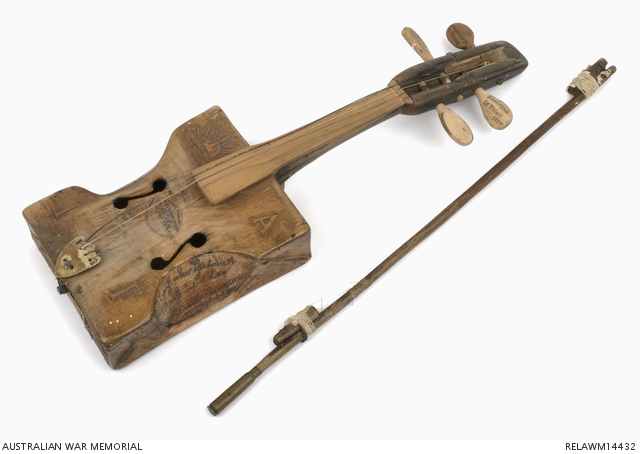 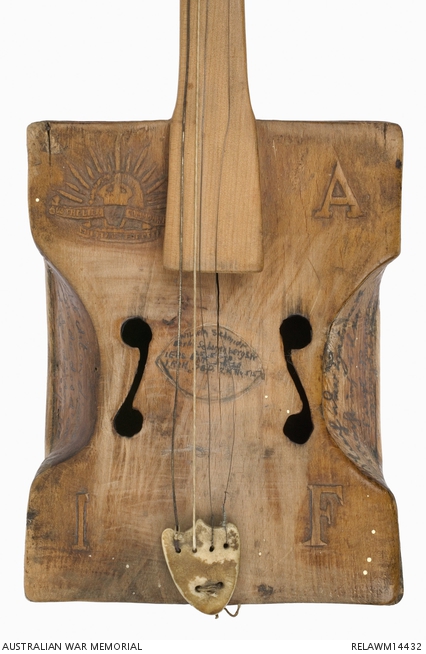 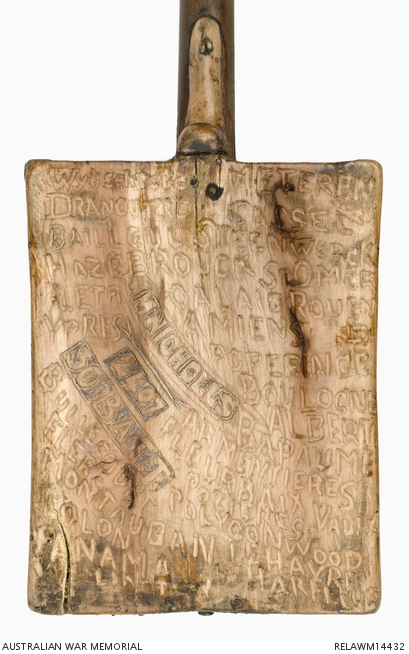 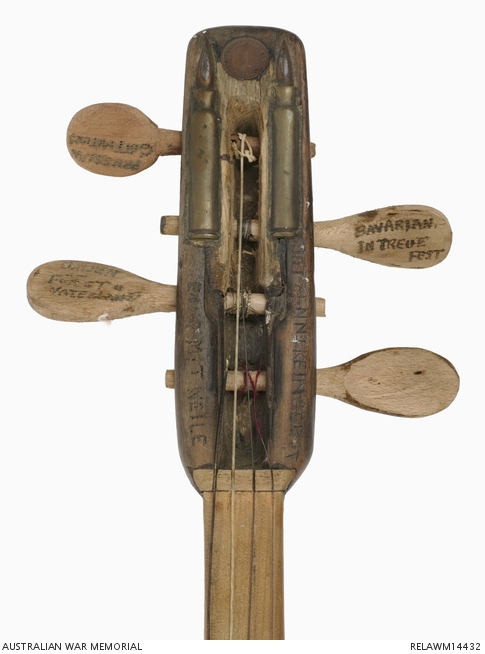 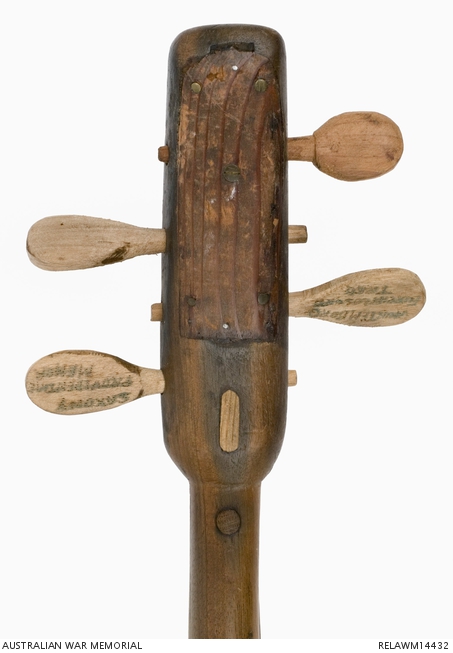 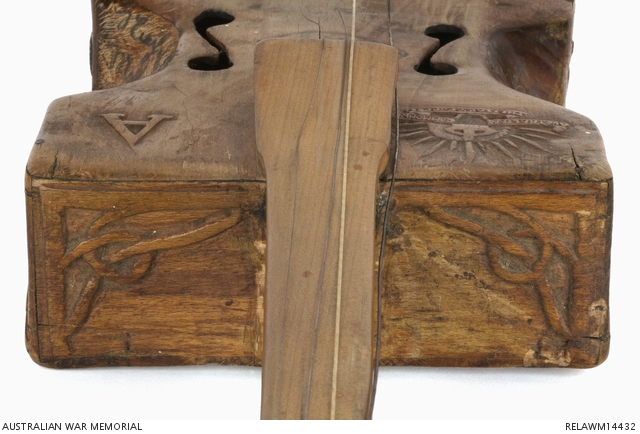 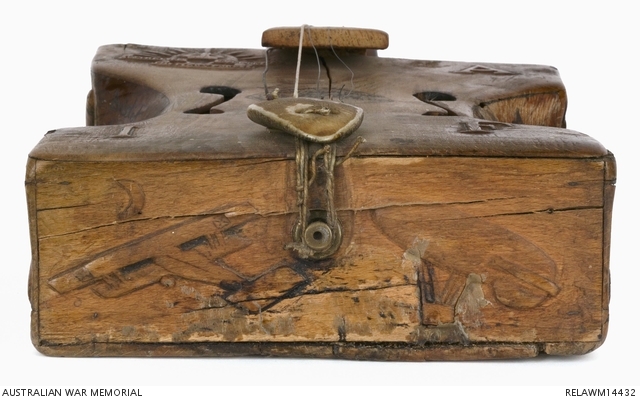 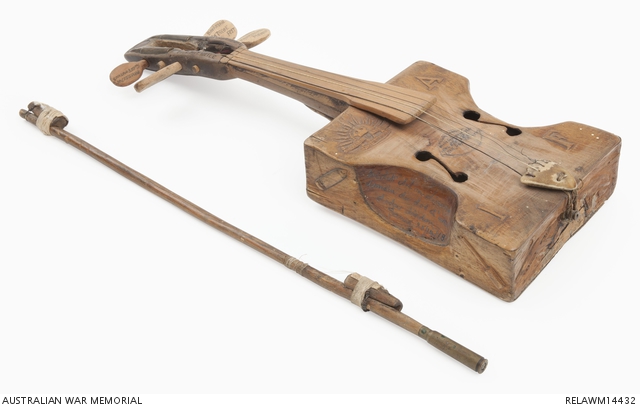 Violin made from war relics collected in France during the First World War by 2407 Private Max Nicholls, 30 Battalion AIF.

The body of the violin is made from a German field telephone box of glued and nailed construction with the waist or centre bout realised from two curved pieces of wood inset into the sides.

A pair of F-holes has been cut into the upper face. The neck is made from four lengths of wood, made up of the fingerboard, two neck pieces and a supporting saddle, glued and screwed to the body with gaps filled with resin or gum.

The four carved tuning pegs attach four strings, two of which are wire violin strings, one an early gut version, and the fourth a wound guitar string. Two halves of a bisected German 8 mm bullet have been let into the outer face of the peg box, with a 'Deutsches Reich 1915' one pfennig coin set into the upper scroll portion. The peg box has been reinforced and sealed at the rear with a nailed length of wood.

The tailpiece has been shaped from a human patella (knee cap) and drilled to accept each of the four strings. Two lower holes have been added to allow the tailpiece to be attached to a brass end button using loops of string. The endboard has split longitudinally at this attachment from the tension of the strings.

Supplied with a short matching bow, made from a length of circular section post, with a German 8mm cartridge pushed onto the end as a surrogate screw. The markings at the end of the cartridge indicate it was made in Spandau in November 1916. Both the frog and the head are fixed, tied to the bow with loops of string and copper wire. Traces of hair from a mule's tail protrude from under the frog.

Nearly all surfaces of the instrument have been carved and decorated. The tuning pegs are decorated with German state mottoes, each word made from a series of impressions stamped into the wood and then inked. They read 'Saxony Providentae Memor', 'Bavaria Im treue Fest', 'Wurtemburg Furchtlos und Treue', 'Prussia Gott mit uns' and 'Baden Furst im Vaterland'. The fourth peg contains two mottoes - Baden and Wurtemburg.

A decorative knot pattern is carved into the box shoulder, on either side of the neck saddle. The sides of the box are decorated with depictions of a pineapple grenade, a rifle, an artillery shell and a stick grenade.The endboard features a biplane and an observation balloon.

Both centre bouts are decorated with pencilled inscriptions: one side contains a French tongue twister ('Didot dit on dinera demain du dos d'un dodu dundon. Samur 25/12/18') while an inscription in German is written on the other side, signed 'Karl Sommer, Magdeburg'.

The front of the box is decorated with a carved Rising Sun badge, the letters AIF (one letter to each corner) with a pencilled depiction of an oval German identification disc placed between the F-holes. This reads 'Wilhelm Schmidt / Berlin Schonenberg Str / 25-5-80 / 1 ERS Batt (illegible)'.

Violin made by 2407 Private Maximillian Nicholls, 30 Battalion AIF. Nicholls, born Ballarat, a school teacher of Hobart, Tasmania, enlisted on 8 September 1915, stating his age as 34. He embarked for overseas service aboard HMAT Orsova as part of the fourth reinforcements for 30 Battalion, sailing from Sydney on 11 March 1916 and arriving in Egypt in late April. His battalion sailed for France from Alexandria aboard HMAT Ivernia on 21 June 1916 and arrived at Marseilles eight days later.

His battalion's first major battle was at Fromelles on 19 July 1916. It was tasked with providing carrying parties for supplies and ammunition but was soon drawn into the vicious fighting. The battalion was then rotated in and out of the front line along with others in the brigade, but played no major offensive role for the rest of the year.

Private Nicholls was evacuated sick with influenza and hydrocele, a hernia-related problem, on 31 August but returned to duty the next day. He was detached for duty to 5 Division Headquarters on 17 January 1917 until 2 April when he was evacuated to 3 General Hospital with shell shock, returning to duty at the end of the month. His battalion missed much of the heavy fighting of 1917, being employed in flank protection and reserve roles at the second battle of Bullecourt and the battle of Polygon Wood.

Nonetheless, his neuresthania, or shell shock, recurred and Nicholls returned to hospital on 16 May 1917 at 22 General Hospital at Camiers with the same complaint. He was detached from 30 Battalion and transferred to 5 Australian Divisional Base Depot on 7 June before a recurrence of hydrocele returned him to hospital.

Although he returned to 30 Battalion on 14 July, his nervous condition saw him completely removed from active operations on 25 February 1918 'for reclassification on medical grounds'. He appeared before an Army Medical Board at the Australian Infantry Base Depot at Le Harve the same day. While the Board considered its decision, he was temporarily detached to 5 Division Headquarters Traffic Control and the Australian Employment Company before being declared unfit for further service on 26 March with a diagnosis of 'age 44 & neurasthenia (E)'.

It is also evident that Nicholls had lied about his age, lowering it by 10 years in order to enlist. He was returned to England on 21 April, was embarked for return to Australia aboard the transport Gaika on 12 May and was discharged in Australia on 8 August 1918.

Max Nicholls recovered sufficiently from the effects of shell shock to return to teaching, but possibly not completely enough to enjoy a full social life. By the early 1920s he had moved to tiny Lord Howe Island, 600 kilometres off the east coast of NSW, then with a population of less than 200, to take up the post of teacher at the Central School. A keen ornithologist, Nicholls wrote 'A History of Lord Howe Island' in the early 1950s.

Nicholls made this violin during his service in France. Of its construction he wrote in 1948: 'Work was chiefly with a pocket knife. As I was with an intelligence corps I was able to keep the violin in a secure place when on duty. The body of the violin is made from a small field telephone box and the neck was cut from a German rifle. The bow was made from a stick which had a German notice printed on a disc, stating 'Hoch spannung! Gefahr zu Leben!' (High tension wires! Danger to life!).

'The hair of the bow was made from the tail of an army mule found at Bernafay Wood.' Nicholls used old tent pegs for the tuning pegs and a patella found in Delville Wood. He would have encountered the German state mottos he impressed into the tuning pegs on German soldiers' belt buckles. Nicholls also noted that 'the plane and observation balloon on the end refer to a balloon being burnt in an attack. The twisted design [on the shoulder] was taken from a design cut into a chalk cliff near Montauban. The one pfennig coin was found near Bapaume.'