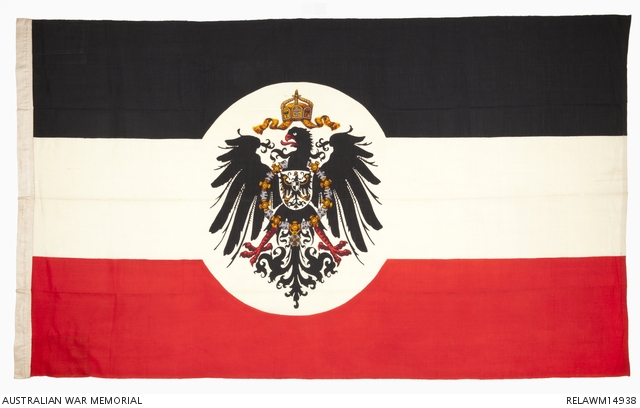 Horizontally striped black,white and red Imperial German flag, with white stripe expanding to a roundel in the centre. The flag is finely screen printed and the centre of the roundel contains a crowned Prussian eagle in black, red and gold. The upper and lower left corners of the flag have had reinforcing patches added.

Associated with the service of Major Ivan Brunker Sherbon, who was born in Sydney, NSW on 16 February 1893.

Sherbon was working as a clerk in the wool department of Dalgety and Co, Ltd. when the First World War began. He applied for a commission with the Australian Naval and Military Expeditionary Force (ANMEF) and with his experience in the cadets and in the Militia with 26 Infantry Battalion as a second lieutenant, he was granted the same rank and posted to ‘H’ Company, 1 (Tropical) Battalion on 18 August 1914.

The force embarked from Cockatoo Island the following day. After a brief period of training at Palm Island, they proceeded to New Britain where after an initial landing early on 11 September, the waiting infantry went ashore in the afternoon.

After a brief stop at Palm Island, the ANMEF sailed for German New Guinea and began landing troops at Kabakaul, New Britain on 11 September. After some short, but savage fighting, the German forces surrendered and the British Flag was raised over Rabaul on 12 September. Within five days hostilities were declared over.

On 17 September, Sherbon and Lieutenant Victor Sampson were tasked with leading a force of 70 men to retrieve a large amount of German currency that had been relocated to Toma, which was inland from Herbertshohe. During their advance towards Toma, 26 uniformed German soldiers and 79 native soldiers were encountered. They had already been informed of the surrender and offered no resistance to Sherbon and his party. The currency had been split up and stored in three locations. Over the ensuing days, Sherbon, Sampson and their men located each site and retrieved the money. In all, the expedition took 9 days.

The Imperial German flag was acquired by Sherbon during his service with the ANMEF. He was promoted to lieutenant on 1 January 1915 and when the initial ANMEF contingent returned to Australia later that month, he brought the flag home with him.

Sherbon’s appointment with the ANMEF was terminated in early February 1915. He applied for a commission in the AIF and was appointed as a captain to B Company, 19 Battalion on 5 May. He embarked with the battalion from Sydney aboard HMAT A40 Ceramic on 25 June.

After a period of training in Egypt, the battalion was sent to Gallipoli, where they arrived on 21 August. The men were sent straight into action at Hill 60, the last attack at Gallipoli by the AIF where the inexperienced battalion suffered heavy casualties. Following the attack, 19 Battalion remained in defensive positions, mainly around Pope’s Hill. Sherbon was noticed by his superiors for his consistent good work and leadership during his time on Gallipoli.

After the evacuation of Gallipoli, 19 Battalion returned to Egypt for a period of training and reorganisation. On 18 March 1916, the Battalion sailed for France, arriving at the port of Marseilles on 25 March. They took part in its first major action at Pozieres in late July, where Sherbon again distinguished himself and was recommended for a Military Cross. He was promoted to temporary major on 21 August.

After the battalion was withdrawn from Pozieres at the end of August, the men were sent north into Belgium where they occupied a part of the Ypres Salient. Sherbon was again recommended for a Military Cross in September. The battalion returned to France in October in preparation for the attack near Flers.

On 5 November, 19 Battalion occupied trenches near Flers. Early in the morning of 14 November, Sherbon was organising his men forward of Switch Trench when he was shot in the stomach. He was carried back into the trench and taken to a nearby dressing station where he died. He was buried at the Thistle Dump Cemetery at High Wood, Longueval.

On 1 January 1917, Sherbon was posthumously awarded a Military Cross. His citation reads: ‘For his coolness, resource and courage whilst assisting the Adjutant on the night of 28th/29th July 1916, in getting the 28th Bn. into its position for the attack on POZIERES. This officer took post in an exposed position at the head of a communication trench where many casualties had occurred. He kept the men moving forward and sent them in the correct direction across country to their position for deployment.

This officer has repeatedly during the period of 26th July/ 4th August 1916 displayed great coolness under shell fire, and his work both in Gallipoli and France has been consistently good.’